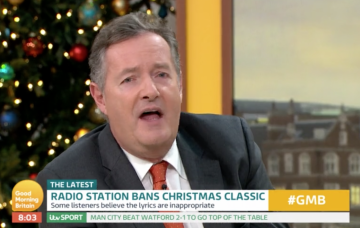 Feminist claims it's about sexual assault

A number of stations in the United States have removed the track from playlists after the lyrics came under fire in the wake of the #MeToo movement.

Speaking during a debate on Good Morning Britain, journalist Daisy Buchanan said the song was about a man assaulting a petrified woman and it should be banned until “the world has changed”.

She said: “Christmas is a very dangerous time for women. It’s dark early, everybody is drinking. This song reflects the experience that so many women have had.

“This is a song about trying to get away from a man and being assaulted. She’s trying to say no.

“That is a song about women trying to express themselves to say this is what’s happening, this is what I want to do, please listen to me. And the man going, ‘No, we’re going to do what I want,’ talking over them which is exactly what is happening to me now Piers.”

But Piers fired back and insisted the song was completely harmless and charming.

“Daisy, this isn’t sexism. This is flirtation, harmless flirtation from a beautiful, harmless scene in a movie.

“It’s a wonderful song that everyone has enjoyed and we should continue to enjoy.

“Radical feminists like you want to suck the joy out of everything and make this look like sexual assault.

“She gave consent, she stayed. Do you not read the lyrics? She’s flirting with him.”

Read more: Why Iceland’s new Christmas advert has been banned

But Daisy insisted: “‘I think we have to move with the times. I’m not saying a total life-long ban of Baby It’s Cold Outside.

Should Baby It’s Cold Outside be banned or is it harmless? Leave us a comment on our Facebook page @EntertainmentDailyFix and let us know what you think!