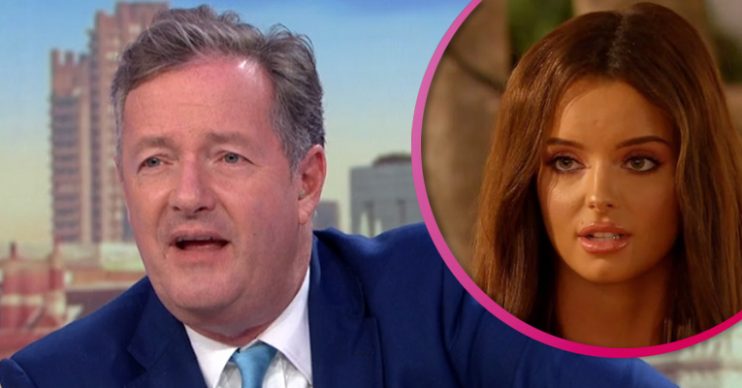 More than 700 viewers complained about her behaviour

Piers Morgan has hit out at Love Island bosses for not removing Maura Higgins from the villa for her behaviour towards Tommy Fury a few weeks ago.

Maura became the centre of criticism last month when she straddled boxer Tommy and tried to kiss him even though he said no and swerved the smooch.

Around 700 viewers have complained to watchdog Ofcom about Maura’s behaviour and Good Morning Britain presenter Piers has said if it was a man, he would have been “thrown out of the villa”.

On Tuesday’s edition of the daytime show, Piers said: “She attacks men – here she is forcing herself on a man and she’s a feminist icon.

“Of course if a man was doing this to a girl in there he would be attacked, shamed and probably arrested and jailed.

“But because she’s doing it she’s a feminist icon. If a man did it he would be thrown out of the house.”

Last month, Piers branded Maura a “predator” for her actions towards Tommy during an episode of GMB.

At the time, Ofcom received almost 500 complaints on the Friday the scenes aired (June 14).

A spokesperson has said: “While we recognise that many viewers disapproved of a contestant’s behaviour in this episode, we took into account the context in which it occurred, including the nature of Maura and Tommy’s relationship, before and after.”

709 out of the 726 complaints were from viewers who alleged that Maura had “sexually harassed” Tommy by trying to kiss him, Ofcom said.

Meanwhile, more recently Maura has been caught up in more drama after admitting she fancies fellow islander Curtis Pritchard, who was coupled up with Amy Hart.

Amy has quit the villa after her split from Curtis reportedly left her “broken hearted”.