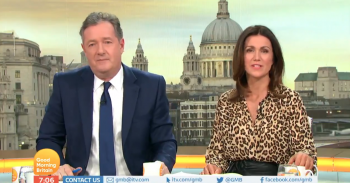 GMB presenter had a bit of a meltdown over Fireman Sam

The 53-year-old TV motormouth claimed the series ‘excludes’ men “from being loose” during a bizarre tirade in which he ranted about the hypocrisy he sees in positions taken against gender-specific branding.

Piers expressed his displeasure with the London Fire Brigade for taking issue with children’s cartoon Fireman Sam. He rejected the argument the title excludes females and could dissuade them from wanting to become firefighters.

“If females are put off joining the fire service for Fireman Sam, I was put off being an explorer because of Dora,” the presenter whinged.

He continued: “What are we going to do with Call The Midwife? That’s going to have to go, isn’t it?”

Despite co-host Susanna pointing out men can be midwives too, Piers blustered on and muttered: “Midpersons. Midpartners.”

He ranted: “As always, the great British public are basically exposing the ridiculous flaws in all this. Imagine getting The Liver Birds or Men Behaving Badly on air these days?”

Making out as if he was an offended victim, Piers garbled on: “‘You’ve just triggered me!'”

However, Piers got back into the stride of his diatribe after Susanna sarcastically pointed out a show featuring only women sitting around chatting wouldn’t make TV.

Fuelled by his colleague’s comments, Piers banged on: “How can I be a loose person if I watch Loose Women because it’s actively discouraging men from being loose. So therefore it is sexist.

“But as always, it is fine to have female-branded thing – it’s a problem when it’s the other way round.

Piers insisted the approach he was criticising was ‘hypocritical’ as he interrupted Susanna a few moments later.

“Oh yeah, best way to redress the balance is to do the complete thing you’ve moaned about for hundreds of years in reverse,” he went on.

“We’re going to do all the things that you said that we said were wrong.”

Piers provided his own solution for an encore… before suggesting there may be a flaw in it.

Unable to resist, Piers got one final dig in before Susanna rolled her eyes and moved onto the next segment.

“You know what would happen then? The transgender community would be furious,” he concluded with a flourish.

“Oh for goodness sake,” Susanna reacted, under her breath.

Viewers putting their views forward on Twitter had a mixed reaction to Piers’ comments.

“So true, someone will always be offended it’s now so ridiculous,” tweeted one.

Another added: “He’s got a point!”

A third contributed: “I love Piers, he is classic. He makes my day with the comments he makes. What he was saying about Dora the explorer and Call the Midwife was hilarious too.”

However, others were not impressed.

One viewer seethed: “Morgan, unwatchable. Unpleasant. Irritating. Not funny. Nobody on the show likes him it seems, including the guests.”

Another said: “@susannareid100 has the patience of a saint.”

And another observer tweeted: “The chinless wonder! Shouting over everyone!”