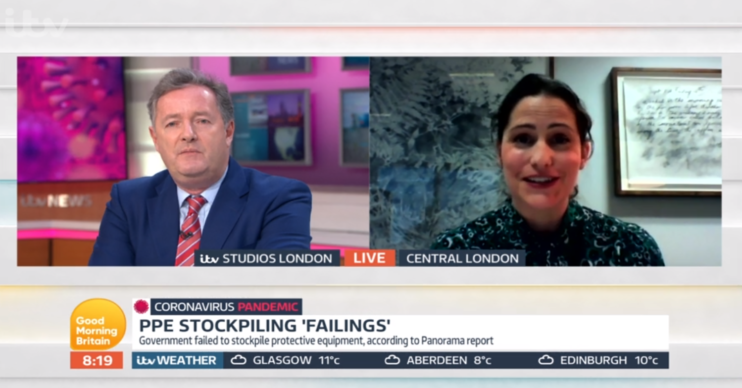 She insisted she wasn't laughing

On Tuesday’s Good Morning Britain, she was asked about the failure to provide adequate levels of PPE during the cornonavirus crisis.

Read more: Piers Morgan thanks fans as he’s cleared by Ofcom after complaints over GMB interviews

The Minister for Safeguarding was asked about the BBC Panorama investigation into the lack of PPE for NHS staff.

The investigation found a lack of gowns, visors, body bags or swabs in the government’s COVID-19 pandemic stockpile.

The MP was on the daytime show to discuss the increase in dosmetic abuse cases during lockdown.

However, Piers moved the interview along to the lack of PPE on the frontline.

He asked: “On the 19th March, the UK downgraded COVID-19 from HCID, which is the high consequence of infectious disease category.

“It requires a very high level of PPE, legally, for health workers it was downgraded.

“You’ve just said that,” Piers interrupted. “Do you know why it was downgraded or not?”

“I’m not a scientist, Piers,” she replied.

“No, you’re just a Government minister in charge of safeguarding,” Piers angrily responded.

As the minister seemed to laugh, Piers fumed: “Well you can laugh – I don’t know why you all keep laughing when I talk about this. It’s not funny!”

Ms Atkins denied laughing and tried to steer the interview back to the domestic abuse bill.

However, Piers asked: “Have you ever heard of Exercise Cygnus?”

After being continuously probed, she admitted that she hadn’t heard of the 2016 Government simulation exercise to see how prepared the UK was for a possible pandemic.

Piers went on: “Why didn’t you act on those concerns? Why are you laughing?”

“We’re looking at the scientific evidence,” she tried to respond.

“The government keeps sending out ministers like you who don’t have a clue,” Piers said. “Do you see how this looks to the viewers?”

What did Piers say after the interview?

“People will say, why… anyone listening to that minister, making it up as she goes along.

“She just repeated what I said. It’s ridiculous and offensive.”

Minister for Safeguarding Victoria Atkins responds to @piersmorgan's question about why the government didn't act on Exercise Cygnus warnings over the lack of PPE. pic.twitter.com/0FaTL4Ldsf

There was a lot of support for Piers over on Twitter.

One said: “Piers ripping Victoria Atkins to absolute bits she has not got a clue. Got to love him #goodmorningbritain.”

“Why are ministers incapable of taking scientific advice and putting that in broader context to make decisions,” another raged.

“We are sick of them hiding behind the mantra ‘we are following the science.'”