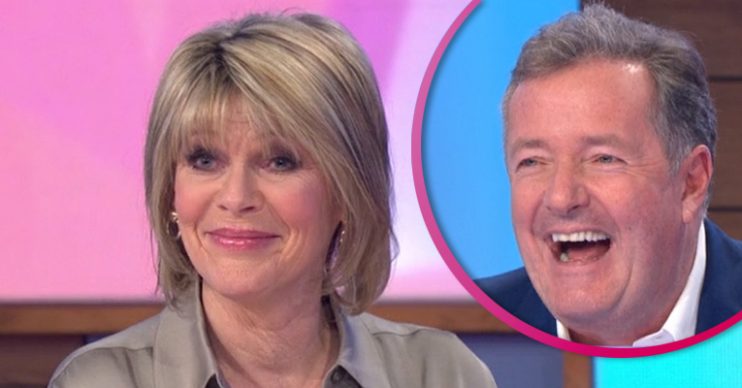 She didn't know where to look

You can always guarantee Piers Morgan to put the cat among the pigeons and in today’s episode of Loose Women (Tuesday February 4 2020) he made host Ruth Langsford blush.

Host Ruth, 59, and the panel were quizzing Piers and GMB co-host Susanna Reid as they prepared to jet off to LA for the Oscars, and asked them about which celebrities were the nicest, when Piers quipped: “We all know people who are supposed to be nice in the business, don’t we Ruth?”

We all know people who are supposed to be nice in the business, don’t we Ruth?

When he saw that Ruth was embarrassed by the comment, and with the studio audience roaring with laughter, he added: “I wasn’t talking about Ruth…”

As the awkwardness grew, Piers said: “Let’s move on… Eamonn [Holmes, Ruth’s husband] will like that one though.”

It comes after it was claimed that Ruth made an official complaint about Phil after he interrupted her during a link between the two programmes, and Piers couldn’t help but make a sly reference to the alleged incident.

Phillip and Ruth appeared on the same stage together at last week’s National Television Awards, when they picked up an award for This Morning.

But viewers spotted tension as the pair were forced to share a stage together.

And even though he went out of his way to let her speak, viewers thought they looked uncomfortable together.

One said: “Did anyone else feel awkward watching Phil touching Ruth’s arm saying how much they loved her & Eamonn when she looked like she wanted to shove him off the stage #NTAs.”

Phillip’s presenting partner, Holly Willoughby, has since briefly spoken out amid the claims.

Holly, 38, also said that it would be “impossible” to fake her on-screen chemistry with her co-host.

The presenter told Closer: “It’s funny, because we knew this would probably come up. Actually, it’s been quite an easy one for us, because there’s nothing to defend.”

She continued: “We ring each other and talk to each other all the time anyway, about this and other things.”