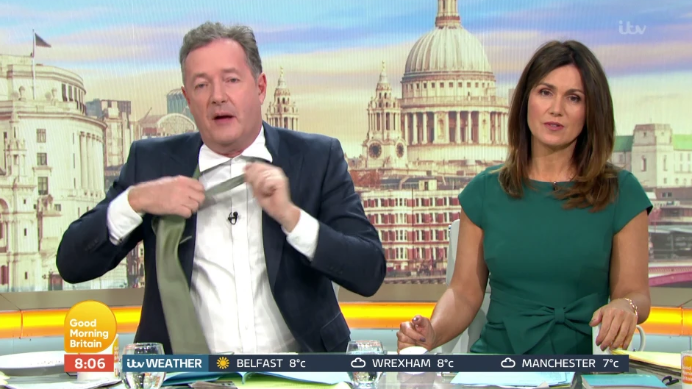 It came after viewers said they didn't approve

TV’s Piers Morgan ripped off his tie on today’s Good Morning Britain after being told what to wear.

The presenter took off his neckwear after discussing how Labour MP Tracy Brabin hit back at trolls after she was criticised for wearing an off-the-shoulder dress in the Commons.

Piers said on the daytime show: “I do think it was inappropriate. If it was a bloke wearing shorts we’d all go ‘nooo’.

“Come on, wear something that isn’t falling off your body.”

Later in the programme, Piers decided to protest over his own clothing and took off his tie.

That tie is never appearing again. I’m going without a tie for the rest of the programme.

Speaking about her green dress and Piers’ green tie, Susanna Reid said: “I don’t think we’ll be wearing these greens again will we?”

Referring to viewers’ comments on Twitter which urged him to ditch the tie, Piers said: “They think I look covered in vomit.

“If I wore my pink tie, they’d all think ‘look at him, he’s vibrant, exciting.'”

The presenter then read out one tweet from a viewer which read: “Change the tie, absolutely hideous.”

Another message read: “Piers, you’re a legend and my secret crush but lose the tie.”

Piers said: “You know what, I am losing the tie,” as he started to take it off.

He added: “I’m not having this. It’s coming off. That tie is never appearing again. I’m going without a tie for the rest of the programme.

“What are they going to do about it? Fire me? You’re going to fire me for not wearing a tie? No you’re not.”

Susanna quipped: “They haven’t fired you for worst to be fair,” as Piers laughed.

Viewers were in hysterics over Piers’ ‘protest’ and were glad he ditched the tie.

One person said: “Thank God for that, it was minging!”

Another wrote: “Good. It was an awful tie.”

A third added: “Thank goodness for that. Well done.”

Good. It was an awful tie

Thank goodness for that. Well done 😀