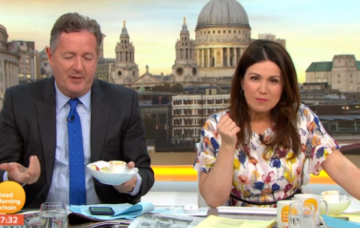 The perils of live TV!

Susanna Reid and Piers Morgan were surprised when the Good Morning Britain cameras returned to them after an ad break on Monday as they were still tucking into their breakfasts.

The hosts were caught munching on fruit and peanut butter when the show came back on air for the latest news updates.

Mum-of-three Susanna, 47, looked embarrassed as she apologised for being caught out eating on air.

“Ohh, sorry,” she said as she chewed.

“Are you alright?” Piers asked her.

“I was caught having some apple and peanut butter,” she replied.

Piers, 53, was nonplussed, and seized the moment to express his annoyance over the fact they don’t have a toaster at the new GMB studio.

“But we can’t have a toaster here because of health and safety in the new building, they’re banned. So that means I can’t have toast and banana – the breakfast I’ve been having for two and a half years.”

Good Morning Britain is one of a number of ITV shows which has relocated from London’s South Bank to White City while their old facilities are revamped.

Susanna said of Piers’ rant: “That doesn’t explain the fact that I should not have been eating on air.”

He remained unrepentant, saying: “We have been caught unawares here, normally we plan our toast nibbling but we can’t because we can’t have a toaster.”

They then cut to Andi Peters who backed up Piers’ complaint.

“I had toast from a toaster on a plane recently so why can’t we have a toaster in a building that produces television?” he asked.

Later in the show, Piers revealed their grievance had been noted and dealt with.

“Breaking news, I’m being told we are getting a toaster, but it will be a supervised toaster,” he said.

“Will it come with a bodyguard?” Susanna joked.

Piers then clarified it was “for everyone” and not just because he’d demanded it.

“You get want you want in the end, if you believe in things passionately enough, fight for them people! That’s the message of this morning,” he said.

They then got a rush of comments from viewers who said they would be happy to get a job as the GMB toaster supervisor!

“Hey Piers…I will be your toast supervisor… Only if you share your toast with me,” one wrote.

Another joked: “Piers, could you tell me where I can apply for the job of toaster monitor?”

A third wrote: “Happy St. George’s Day Piers. I’ll come and make your toast anytime for you,” while a fourth offered to bring some in for the presenter!

Did you enjoy watching GMB this morning? Leave us a comment on our Facebook page @EntertainmentDailyFix and let us know what you think!