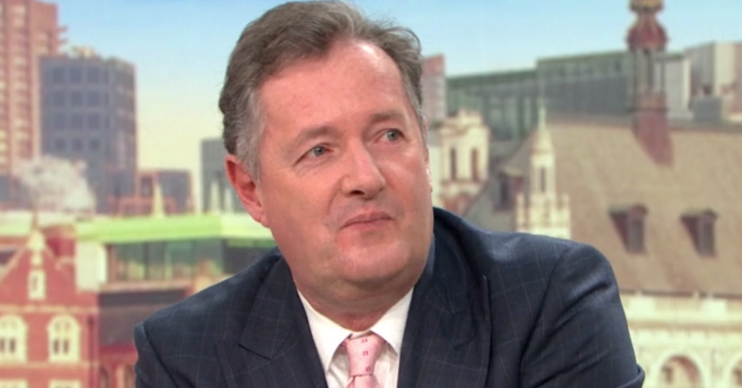 Told Andi Peters his comments were 'unacceptable in the workplace'

TV host Piers Morgan gave a Good Morning Britain co-star a thorough dressing down after he objected to being ‘fat-shamed’ earlier today.

Piers, 54, quarrelled with presenter Andi Peters throughout this morning’s breakfast TV programme as Andi teased the returning Piers over his waistline.

But Piers left viewers reeling after he fired back at Andi over his jokes, which he labelled “wrong” and “offensive”.

The two telly personalities had been joshing back and forth as Andi fronted a segment concerning British Pie Week.

Andi explained Brits eat an average of 26 pies a year as he exchanged barbed comments with Piers, including one dig where Andi suggested he wasn’t addressing Piers when the host piped up as the former CBBC star was talking.

Smirking, Andi then posed the question: “I wonder who’s eaten all the pies in this studio?”

I wonder who’s eaten all the pies in this studio?

And before long, he was overcome by chuckling as he noticed Piers’ unamused expression and directed the cameraman to “look at his face”.

Andi then approached Piers and fellow hosts Susanna Reid and Charlotte Hawkins where they were sat in the studio, but Piers lifted his hand to stop Andi in his tracks.

Getting worked up for a rant, Piers said: “You know what, mate?”

But Andi quickly replied: “Seriously, I was going to do the gag anyway and I thought: ‘Shall I?’ And I did. I went for it.”

Piers, however, cut him off to dish out a telling off.

He said: “Look, fat-shaming is actually really not acceptable any more in the workplace.

“You were talking the other day, you had your complaints about the way workplaces operate – I don’t like being fat-shamed by you, okay?”

Not to be interrupted by an incredulous Susanna, Piers continued, biting his lip: “It triggers my anxiety, it’s wrong. It fills me with self-loathing.

“Everything about what you just did is offensive, wrong, and I really feel you should apologise.”

A defiant Andi replied: “But my question to you, Piers, before I contemplate apologising – do you like a pie?”

Unable to deny the truth, Piers admitted, before bursting into laughter: “I love a pie.”

He also later joked Andi should be ‘fired’ over the ‘banter’.

However, not everyone at home was as tickled by the skit as those in the studio.

One social media user reacted: “@piersmorgan #BeKind to Andi, I know it’s Monday but you are way too grumpy Piers.”

Another person tweeted: “#GMB oh & the way Piers talks to Andi is disgusting.”

And a third person on Twitter commented: “I’m sorry Piers but if you think it’s acceptable to dish out the fat-shaming then you should be willing to take it back, you’re not above everyone else just because your on TV. If Andi is offensive then so are you!”