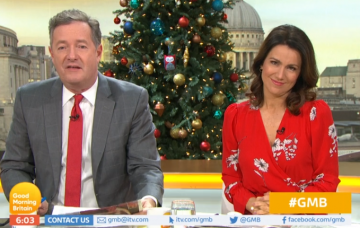 Piers Morgan has admitted he loves being sacked and “can’t wait” for it to happen to him on Good Morning Britain.

The TV host, who was sacked as editor of the Daily Mirror in 2004, made the quip while joking he had applied for the job of Donald Trump’s Chief of Staff.

His co-host Susanna Reid read out his application for the job.

She read: “You need someone whose reputation will not be remotely tarnished by working with you.

“And won’t mind in the slightest if you suddenly fire him. I’ve been fired by big jobs before and always found it both character building and financially lucrative.”

As she laughed at his comments, Piers – who was ‘hired’ by President Trump when he took part in the Celebrity Apprentice USA in 2008 – hit back: “Yeah, they give you a massive cheque and you go and lie on a beach for a bit. It’s fantastic.

“I can’t wait for it to happen here, and it will happen here. People love to fire me.”

The 53-year-old appeared to be deadly serious about wanting to work for the President of the United States.

Writing in his column for the Daily Mail, Piers insisted: “You can actually save money for the country by hiring me. I don’t need a salary and in fact, I’d literally pay to work for you.”

Read More: Susanna Reid says she lost a stone-and-a-half without hitting the gym

Piers, who has hosted Good Morning Britain alongside Susanna since 2015, was also caught out tweeting Pamela Anderson live on air.

The former Baywatch star had tweeted: “I understand it’s not easy to accept me as I am. I stir posts unconventionally and will continue to do so.”

Rather than focusing on the breaking political news they were covering on GMB, Piers instead tweeted Pammy back, writing: “I just love the way you are Pamela – keep stirring those pots.”

Do you think Donald Trump should hire Piers? Leave us a comment on our Facebook page @EntertainmentDailyFix and let us know what you think!