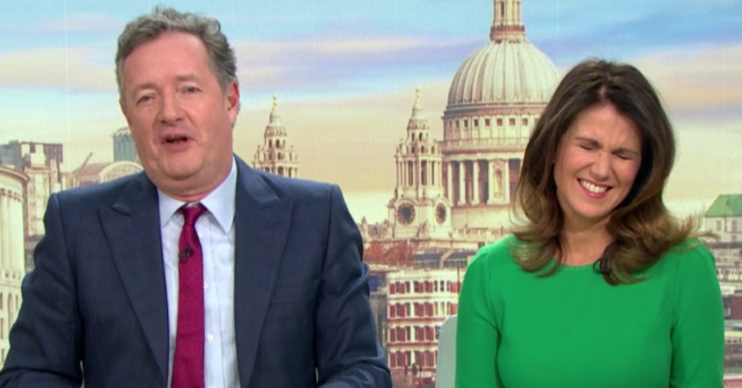 Piers Morgan also had a pop (course he did)

Breakfast TV host Piers Morgan didn’t miss out on an opportunity to wind up Good Morning Britain colleague Susanna Reid earlier today after she revealed a glimpse of herself from twenty years ago.

Susanna, 49, retweeted an image on Twitter last night showing her first appearance as a newsreader for the BBC news back in 2000 – leaving many followers stunned at the changes in her appearance.

A clip of the vintage broadcast made it to air on GMB this morning. And while Piers was quick to highlight the big difference in Susanna’s hair, he also made the most of mocking her vastly altered presenting style.

Getting stuck in, Piers noted: “Your hair has changed.”

Susanna, who took the ribbing in good humour, grinned as she took in her former self’s delivery of the headlines – and admitted her short hair was a big departure from the styles viewers may associate with her now.

“Playmobil hair, I call that,” referring to the children’s figures in which hairpieces can be clicked onto the toys’ heads.

Playmobil hair, I call that.

And although Piers acknowledged the passing of time when it came to Susanna’s short cut, he continued to take the mick out of her ‘posh’ and clipped speaking voice by suggesting she could do voiceovers for Pathé News.

He also noted that despite the intervening years, the royal correspondent Susanna spoke with during the clip continues to do the same job.

If I am not mistaken, this was my very first national news bulletin for BBC TV 20 years ago. https://t.co/JykjJpkNCN

He laughed: “Still talking absolute cobblers about the royal family!”

Viewers were blown away by the sight of Susanna from two decades ago, with several proclaiming she looks even better now than she did then.

One fan on social media reflected: “Susanna love the posh voice there and loved seeing you back then presenting BBC news, it just proves your as beautiful then as your are now, even more so Susanna, esp with the long hair.”

Another joked about her previous appearance: “Fresh faced and innocent. @piersmorgan has got a lot to answer for.”

“Like a decent bottle of Bordeaux, you get better with age,” insisted a third person on Twitter.

Someone at TV Live unearthed my first national news bulletin on BBC TV. It was in May 2000 so there’s 20 years between these pictures. Rocking the Playmobil hair 🤣