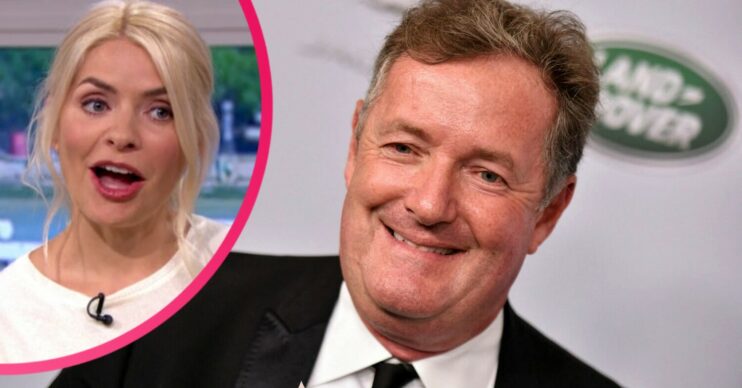 Good Morning Britain bosses appear to be willing to resort to drastic measures if a post by Piers Morgan on Twitter is to be believed.

Since Piers Morgan walked away in March, the show has reportedly struggling with its viewing figures, with numbers dropping to lows of under 500,000 some days.

Piers has been replaced by numerous temporary co-stars, but none have had the same pull with fans.

However, the latest name thrown into the hat could be about to change that.

Holly Willoughby to save GMB from ratings drop?

Holly Willoughby has been a huge hit with viewers for years on This Morning.

However, some recent trouble behind the scenes has sparked rumours a change could be in the making.

Earlier this year, news broke that Holly is taking legal action against the YMU group after they demanded a large percentage of her future earnings.

If forced to pay, there are concerns Holly could walk away from This Morning.

A source told Closer: “She loves This Morning. She really doesn’t want to leave. She is committed to the show, but has been given no choice but to discuss her options.”

Holly’s career woes come amid rumours that Piers could be eyeing up a return to GMB.

Lorraine Kelly told The Sun last month: “He will be back in some shape or form, I have no doubt. I know nothing, but never count him out of anything.”

Piers has now added fuel to the fire with a tweet suggesting ITV is keen for him to return to the show with Holly by his side.

The controversial presenter shared a picture of a magazine headline that read: “Holly and Piers – can they save GMB?”

He captioned the image “Well now…” and added a detective emoji.

Fans rushed to comment, with one saying: “I like Holly but she’s too fluffy for GMB. You need trained journalists as presenters to ask challenging questions.”

A second replied: “Love Holly. She projects happiness every time she is on TV. She’s a little sunbeam. Piers would make her unhappy, he’s a professional complainer.”

Do you miss Piers on GMB? Leave us a comment on our Facebook page @EntertainmentDailyFix and let us know