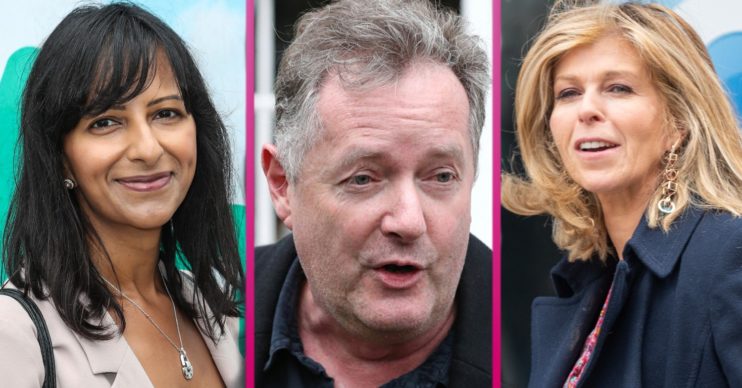 We'd love to see Kate or Ranvir take on the role!

Latest reports suggest Piers Morgan will be replaced by a female anchor on Good Morning Britain.

Since Piers quit GMB in March, his former co-host Susanna Reid has remained at the helm.

While various other presenters have joined her over the months, a permanent replacement has yet to be announced.

Now a TV insider has claimed a female host is most likely as Susanna’s long-term co-host.

The source told The Sun: “It is very possible that we will have two women fronting the show.

“Susanna will take the lead, but the job of her co-host is up for grabs, and it will come down to who is most popular with viewers.”

They added: “The feeling is if Piers doesn’t come back, it’d be unfair to draft in a replacement straight away, both on Piers and his replacement.”

So far the likes of Ranvir Singh, Kate Garraway and Charlotte Hawkins have all co-hosted on the show.

Why did Piers leave GMB?

He said on television that he didn’t believe Meghan’s accusations against the royal family in her interview with Oprah Winfrey.

And he got into a heated debate with Alex Beresford over the matter.

Yet he refused to apologise and instead quit the show all together.

Piers confirmed his exit by tweeting: “On Monday, I said I didn’t believe Meghan Markle in her Oprah interview.

“I’ve had time to reflect on this opinion, and I still don’t. If you did, OK.

“Freedom of speech is a hill I’m happy to die on. Thanks for all the love, and hate. I’m off to spend more time with my opinions.”

He’s on gardening leave with ITV until the end of the year.

Is Piers coming back to Good Morning Britain?

Piers says there have been “discussions” with ITV about him returning to Good Morning Britain.

However, ITV has yet to confirm this possibility.

What’s more, Piers has also teased that he has another big work project up his sleeves.

He recently told Jan Moir that his comeback “will take everyone by surprise, it is not what you expect”.

Who would you like to see host on GMB? Let us know on our Facebook page @EntertainmentDailyFix.