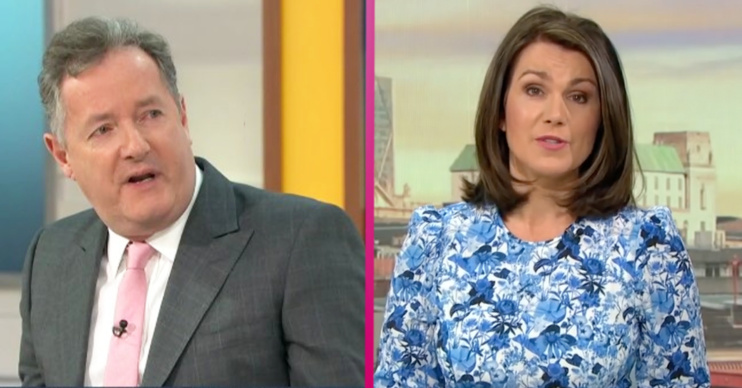 But it's a blink-and-you'll-miss-it moment!

Of course, Piers quit the show earlier this year after a row over Meghan Markle.

But now he’s back – although it perhaps isn’t quite as fans would like.

Piers Morgan latest: Why did he return to GMB?

The controversial TV presenter was seen on screen alongside Susanna Reid and ripping into Health Secretary Matt Hancock.

However, all was not how it seemed.

Piers was part of a compilation video put together by the show to urge viewers to vote for GMB at the upcoming National Television Awards.

He was seen scolding Matt Hancock, laughing with Britain’s oldest twins and sitting alongside the lovely Susanna.

Susanna was, of course, hosting alongside Bill Turnbull today (May 26).

Piers accuses GMB of ‘deleting’ him

Last night, Piers took to Twitter to accuse the show of “deleting” him.

His claims came as he posted about his three award nominations at the upcoming NTAs.

Piers said: “Delighted to have been long-listed in three categories at the National TV Awards (even if I’ve been deleted from the last one).

“I’ve got no chance of winning, obviously, but voting for me would really irritate the usual winners: So feel free,” he quipped.

Delighted to have been long-listed in three categories at the National TV Awards (even if I’ve been deleted from the last one 🤣). I’ve got no chance of winning, obviously, but voting for me would really irritate the usual winners: So feel free.. @OfficialNTAs pic.twitter.com/hUrb9VcH90

However, today’s reappearance of Piers isn’t the first time he’s “returned” since he quit the show.

Earlier this month, when Adil Ray and Susanna Reid were hosting, they presented a segment on Boris Johnson’s apparent boycott of the ITV breakfast show.

A clip showed the PM doing a milk round and Piers was heard to say: “He’s gone into the fridge.”

At the time, Susanna commented on Piers’ return.

Later in the same show, Adil and newsreader Sean Fletcher took aim at the ex-GMB host as they offered praise about Meghan Markle’s new children’s book.

Sean quipped to a speechless Susanna: “You’re sort of flabbergasted of having someone alongside you who says something in praise of Meghan Markle.”

The trio then descended into giggles.

Head to our Facebook page @EntertainmentDailyFix and tell us what you think of Piers’ reappearance.