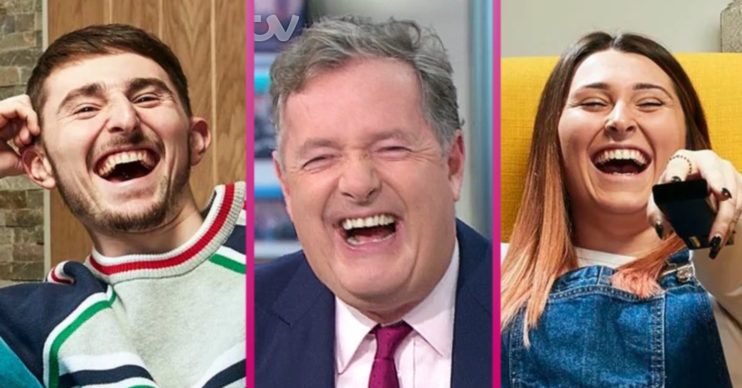 The sibling duo poked fun at Piers on Friday's show

Gogglebox stars Pete and Sophie Sandiford left Piers Morgan in hysterics as they poked fun at him on the Channel 4 show.

The 55-year-old host couldn’t contain his laughter while watching a clip from Friday’s episode of the hit series on Good Morning Britain today (December 7).

During Gogglebox last week, Pete and Sophie commented on the no-nonsense presenter’s attitude and labelled him “hard as [bleep]”.

On today’s GMB, Susanna Reid said: “We got a mention on Gogglebox. Shall we have a look? Friday night, Sophie and Pete.”

A clip from Gogglebox then played, which saw the brother and sister discussing Piers.

In the clip, Pete commented: “Piers has a cup of aggression before he goes on here to get him fired up.”

Sophie added: “And a spoonful of concrete because he’s hard as [bleep].”

The moment left Piers and Susanna in hysterics – and the controversial host was a fan.

The dad-of-four said: “Love that! I love that.”

He then took a swig from his mug, adding: “Just having my cup.”

Susanna replied: “Cup of aggression and a spoon full of concrete.”

What else have Gogglebox stars Pete and Sophie been up to?

Their commentary follows shortly after the sibling duo tickled viewers with their hilarious reaction to an episode of Naked Attraction.

The pair, from Blackpool, couldn’t believe their eyes as one of the contestants fled the set after clapping eyes on a naked woman for the first time.

Pete appeared sympathetic towards the male contestant and said: “You’ve never seen a [bleep] in your life, and the next thing you know you’ve got six in your face.”

He then told a highly amusing anecdote about the first time he had sex.

During the tale he explained that he said to his partner: “Do you want to go get a McFlurry?”

Fans couldn’t contain their laughter, with one saying: “Fancy a McFlurry? Pete on #Gogglebox you are a legend.”

A second commented: “Gogglebox just gets better and better. Pete and his little sister are absolutely brilliant.”