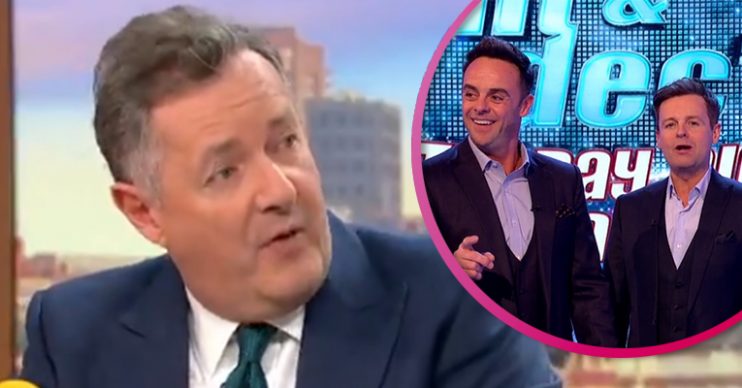 The duo poked fun at the presenter

TV’s Piers Morgan has hit back at Ant McPartlin and Dec Donnelly after they mocked him during Saturday Night Takeaway at the weekend.

During the show’s Men in Brown sketch, the duo were investigating the latest antics going on in an undercover mission.

Ant was told information about the mystery host they were trying to track down.

Ant was told by an ‘alien’: “I actually saw the host at the National Television Awards.”

He then joked: “Really? So it’s a popular television personality… that rules out Piers Morgan.”

The disrespect… we’re one big happy ITV family aren’t we?

He was also told: “It’s someone that doesn’t suffer irritating fools gladly,” to which Ant replied: “Hmm, that also rules out Susanna Reid.”

The sketch was played on Monday morning’s Good Morning Britain and Piers had a few words for the pair.

Susanna added: “We love and respect each other,” to which Piers said: “We do, we do honestly, if you believe that you’ll believe anything.”

He said at the time: “I’m not going this year because it’s a total waste of time.

“Do you know who I’d like to see win Best Presenter? Bradley Walsh. Don’t you think he would be a great winner.

“I can’t do any more of the fake when Ant and Dec or Holly and Phil go, ‘what us again?!’ so I will be at home watching it.”

And he was right as Ant and Dec scooped the Best Presenter award for the 19th year running.