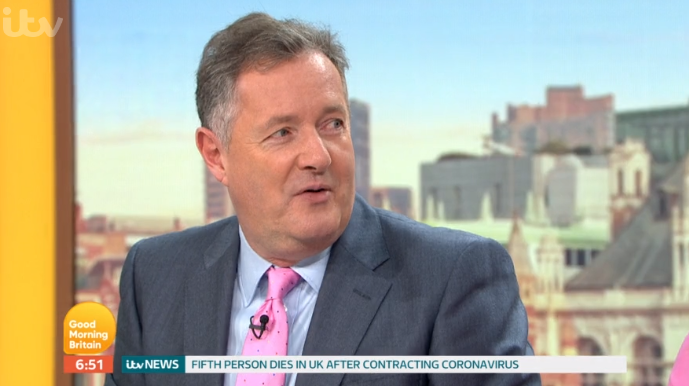 He didn't take kindly to the joke

TV’s Piers Morgan was shocked as he was “fat-shamed” by a doctor on today’s Good Morning Britain.

Speaking about the images on Tuesday’s show, Piers praised Daniel as an actor and said he brings an “intensity to Bond”.

Piers went on to talk about Daniel wearing a papoose to carry his young child.

Piers said: “When he’s promoting Bond, the papoose disappears. Have you noticed?” as a photo of Daniel wearing the papoose appeared on screen.

The presenter asked: “Can we put that picture next to the rippling Bond biceps? I have one question for the women of the world.

“Which one really gives you the flicker ladies? Is it the papoose or is it that one?” as both photos popped up.

The show then put up an edited photo of Piers’ head placed on a ripped bod.

Dr Hilary Jones is then heard saying: “If Daniel Craig stopped working out for three months he could have a body like yours.”

Piers continued: “You may think that but Cristiano Ronaldo, who has the world’s best athletic body, said this…” as a video of Piers’ interview with the footballer played.

In the clip, Cristiano told Piers: “I can see you have good abdominals,” to which Piers said: “Thanks very much, Cristiano. Thank you for appreciating that. You’re looking good yourself.”

Back in the studio, Piers said: “So slightly old, grey, weasel to my left here Dr Hilary casting aspersions on my physique, Cristiano Ronaldo – known as the King of the Abs – said, ‘yeah you have good abdominals.’

If Daniel Craig stopped working out for three months he could have a body like yours.

Piers said: “Do you know what? I’ve never heard Hilary sledge anyone on this show. Have you ever fat-shamed anyone in 30 years? Have you?”

Dr Hilary replied: “No, never. I didn’t fat-shame you there.”

Earlier this month, Piers demanded an apology from his co-star Andi Peters as he accused him of ‘fat-shaming’.

During a segment concerning British Pie Week, Andi said: “I wonder who’s eaten all the pies in this studio?”

Piers said: “You know what, mate?” to which Andi quickly replied: “Seriously, I was going to do the gag anyway and I thought: ‘Shall I?’ And I did. I went for it.”

Piers, however, hit back: “Look, fat-shaming is actually really not acceptable any more in the workplace. You were talking the other day, you had your complaints about the way workplaces operate – I don’t like being fat-shamed by you, okay?”