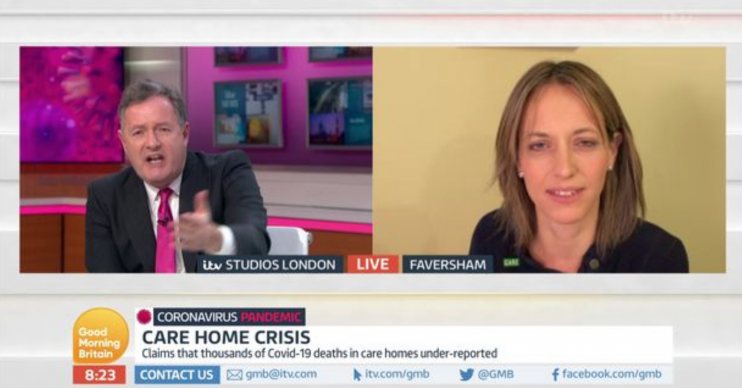 Yesterday, Good Morning Britain star Piers Morgan was forced to defend himself after another fiery interview.

Those watching at home accused the star of “sexism” and “bullying”.

However Piers remains defiant and stands by his line of questioning.

In a car crash interview, the GMB host slammed the MP dodging questions, amid a discussion about alleged unreported deaths in care homes.

Piers accused the Care Minister of “laughing” during the serious segment.

This made for uncomfortable viewing, as the Care Minister repeatedly dodged questions and Piers continued to interrupt her answers.

Viewers were divided by the awkward exchange.

One tweeted: “@piersmorgan Your interview technique is nothing more than bullying. It’s pathetic. #gmb @GMB@Helen_Whately”

The ITV show received 643 Ofcom complaints after the dramatic back and forth.

A spokeswoman for Ofcom told the Metro: ‘We are assessing the complaints against our broadcasting rules, but are yet to decide whether or not to investigate.’

‘We don’t have a figure for that’ – Helen Whately @piersmorgan questions the Care Minister over the number of healthcare workers that have died on the front line from the coronavirus. pic.twitter.com/VFcqFJX5SE

Responding to the feedback on Twitter, Piers Morgan was unrepentant.

“For perspective, it probably wasn’t quite as ‘uncomfortable’ as what our under-protected NHS & carer frontline heroes are going through.”

He later added: “If you’re upset by the ‘bullying’ way I’ve been challenging poor Govt ministers on @GMB,  you can complain to @Ofcom – just click on the link in their bio & you will find information on how to whine about me.”

In response to accusations of sexism, Piers replied: “Ahhhh, of course… I was being sexist!”

“Just for the record, I don’t care what gender Govt ministers are, but I do care if they refuse to answer questions or start laughing when being asked about very serious matters.”

Read more: Good Morning Britain: Why is Piers Morgan presenting on a Thursday?