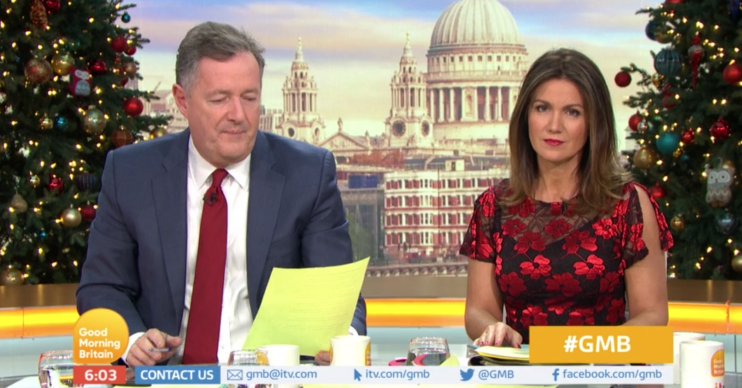 Quoting a “massive” survey from a logo creation company, the Good Morning Britain presenter got worked up over suggestions 27% of respondents to the poll indicated they thought Santa – who is, of course, very real – should get an image overhaul.

“I knew this day would come… when Father Christmas would have to go,” the 54-year-old ex newspaper editor pantomimed.

An incredulous Piers also seemed very vexed about how the fictional character should be referred to, pondering with increasing fury as to what pronouns would be suitable for a ‘Mother Christmas’.

“‘They’,” offered showbiz correspondent Richard Arnold after Piers over-enunciated: “It?”

But while Charlotte Hawkins pulled a face that suggested she was bamboozled by the survey’s results, Piers’ fellow host Susanna Reid wasn’t having any of it.

You can literally find a poll for anything.

“Only one person in four [made these suggestions],” she pointed out with a sigh.

Piers, however, was clearly in the mood for a rant.

“But imagine who… Who are these people?” he spluttered.

“I don’t believe they exist,” Susanna stated matter-of-factly as Piers continued to be hugely offended.

“You can literally find a poll for anything,” she continued as he pointed out it was all written down on a piece of paper in front of him.

A full-size cardboard cutout of @piersmorgan!

Later on in the show, Susanna had festive concerns of her own after she was gifted a life-size cardboard cut out of her controversy-courting colleague.

“The programme was worried I might experience some kind of separation anxiety at Christmas,” she said of the present as it was brought into the studio.

She added as the real Piers grinned next to his double: “Honestly, it is like some kind of nightmare.”