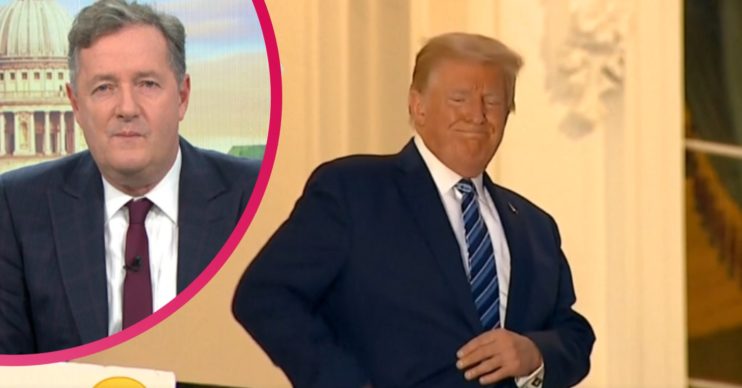 We're not quite sure about that, Piers

Piers Morgan declared himself a “gay icon” in a bizarre rant about Donald Trump on Tuesday (October 13).

The Good Morning Britain star was discussing the U.S. President’s latest ramblings about coronavirus when he made the odd claim.

Trump was seen at a rally in Florida on Monday (October 12) offering to kiss men in the audience before dancing to the song YMCA.

“The guy may well have coronavirus for all we know,” ranted Piers.

“He’s also started dancing, which I’ve never seen!” he continued. “I tell you what, if you’ve ever wondered what he’s like on steroids you’re seeing it now!”

“The weird thing is he keeps choosing YMCA because it says ‘young man’. But do you think he has any idea about its meaning?”

“Richard, do you want to educate the President on his preferred music of choice? Is trump a gay icon?” asked Piers.

“More than you are, love,” responded Richard Arnold.

Read more: Why Meghan and Harry could spend New Year’s in the UK

What has Piers Morgan been saying about Donald Trump?

The ITV presenter has been slamming Mr Trump’s behaviour whenever he can get a chance.

The pair were once pals, but Piers has had a big change in attitude the POTUS’ politics.

However, despite his dislike of Mr Trump’s behaviour, Piers was forced to call out trolls on Twitter after some wished death on the President.

One Twitter user said: “Just so we’re clear here: I hope he dies.”

Another Twitter user replied to Piers, saying: “You can’t deny that it’s ironic that a guy who said it was a hoax and that it would magically disappear has now contracted it.

“He has also been so lame in dealing with it that the US is in a terrible mess.

Piers replied: “Nobody’s been more critical of Trump over Covid than me.

Good Morning Britain is on every weekday from 6am on ITV