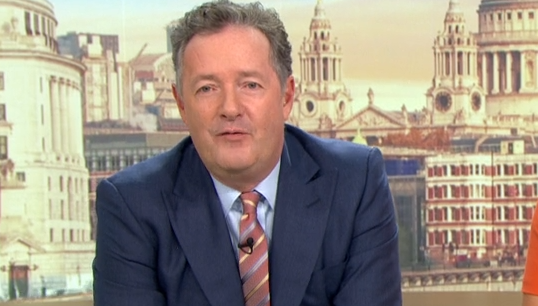 Piers brought up Laura’s trousers in conversation as he described them as “hot pants”.

Many viewers took to Twitter to accuse Piers of being “sexist” and “humiliating” towards Laura.

But the controversial presenter denied the claims.

Piers read out a tweet from a viewer later in the show, which branded his comments as ‘sexist’.

“Well out of order, the sexist comment on Laura Tobin’s trousers,” the viewer said.

“A woman should be able to wear what she likes without it being sexualised.”

Co-host Susanna Reid then waded into the argument, by telling Piers off for ‘objectifying’ his workmates.

But Piers hit back, by saying: “When a female presenter parades herself in skintight leather trousers to do the weather, you are going to get people going: ‘wow.’

“If she is going to wear figure-hugging leather trousers I am going to notice.

“You deliberately wore them to get people to notice, all of you wear clothes hoping they will get noticed.”

When Laura described her trousers as ‘sustainable’, Piers quipped: “They’re certainly sustaining me.”

Both Laura and Susanna, 49, the went onto explain once again to Piers the difference between complimenting a female colleague on the way she looks and objectifying someone at work.

Towards the end of the show, Laura took to Twitter to say that she was not humiliated by Piers.

“They’re just a pair of trousers,” she said.

“I thought I was being stylish!”