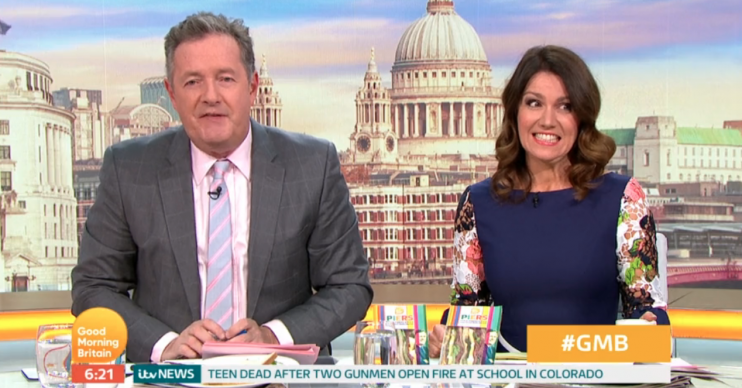 He accused 'concerned' Susanna Reid of being like a "nanny"

Presenter Piers Morgan had his Good Morning Britain colleagues in stitches earlier today after repeating a word used in the latest episode of Line of Duty.

The 54-year-old affected a high-pitched voice and made out he was imitating ‘headmistress-like’ co-host Susanna Reid during the odd tirade after she pondered whether a clip from the BBC drama should have been censored further before being aired on breakfast TV.

She indicated TV producers should probably have bleeped out more bad language from the exchange between DI Kate Fleming – played by actress Vicky McClure, whose birthday is today – and AC-3’s DI Brandyce which contained a line of dialogue hailed as ‘the greatest in TV history’.

“We’re witnesses not suspects so stop making a [bleep] of yourself and [bleep] off,” Fleming was seen telling the other copper during the brief confrontation, cutting Brandyce down to size as she tried to pull rank on the AC-12’s officers.

However, while the second instance of bad language in the sentence was indeed bleeped out when it was shown earlier this morning, the first bit was not.

“I have a feeling there should have been two bleeps there, instead of one,” a mock-solemn Susanna piped up as the rest of the presenting panel chuckled at the put-down.

“I think there should have, yes,” Kate Garraway agreed with a smile.

However, a baffled Piers took “nanny” Susanna’s comment at face value and took affront to her ‘sensitivity’ as she rolled her eyes at his OTT reaction.

“We apologise! Too many people offended about the use of the word [bleep]!” Piers sarcastically squeaked.

Referring to the early hour, he continued: “We’re not allowed to use the word at 6.21 and 17 seconds! And we would like to apologise to anybody who was offended by the use of the word [bleep] at 6.21.”

Intervening, Kate noted: “We could be referring to the bird of course.” But that only stoked up Piers as he questioned how such a censorious approach could affect his ability to broadcast potential news reports about particular kinds of birds.

“What do you call a Great Tit? There’s blue tits, too. Loads of tits,” the motormouth ex newspaper editor blathered on.

“Please get a grip. ‘Tit’ is not offensive but I think now you may have started something,” one viewer reacted on Twitter.

“We try to put up with a massive [bleep] every morning,” contributed another, apparently referring to Piers.