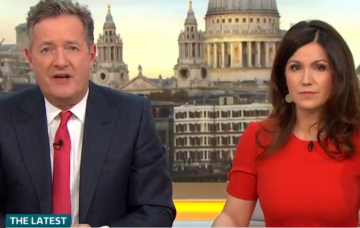 Piers Morgan claims he was denied entry to GMB studios

He also walked off the set after 'winning the lottery'!

Piers Morgan was unhappy his fame didn’t precede him when he arrived at the new Good Morning Britain studios last week.

And on Wednesday he also walked off the GMB set after ‘winning’ the lottery! Kind of…

The 53-year-old former newspaper editor revealed on Wednesday’s show that he had an “uncomfortable moment” with a security guard who failed to recognise him as the co-host of the ITV show.

“I said, ‘I’m Piers’ – but he had no idea who that was or what I should be doing here,” the presenter recalled of the moment he was refused entry into the building.

Piers said he was then asked, to his astonishment: “Why would you be at the Good Morning Britain studios?”

GMB is among a number of shows which have relocated to the old BBC Television Centre while facilities on London’s South Bank are revamped.

Dancing On Ice star Alex admitted he was left out in the cold as his security pass wasn’t working.

Read more: This Morning sends Kate and William a baby gift (destined for the bin)

It was Susanna Reid who came to the rescue, as she had to go and let the weatherman in.

“My pass just wouldn’t work,” Alex admitted. “I don’t know why. We need to sort that out, security!”

Piers joked that Alex could have had a similar conversation with security to his own last week.

He said the conversation would have gone something like this:

‘I came fifth on the dance show on ice. I did the tour!'”

But Piers said he did have sympathy as speaking from his own experience, “once the security guys don’t recognise you it’s an awful moment”.

Also on today’s show, Piers Morgan joked that his numbers had come up on the lottery and he’d won the £121m Euromillions jackpot.

He celebrated and walked off the set, to the delight of Susanna and Charlotte Hawkins, before returning admitting: “I’ll earn more by staying here.”

The presenter was then amused by a magazine article that claimed people either “loved or loathed” his co-host Susanna.

He said he was astonished anyone would “loathe” the 47-year-old mother-of-three – but still took great delight in saying they would run a poll on their Twitter page to find out the answer.

“I can’t believe the joy I am going to have with this, as it’s usually all about me,” he said.

“I love you, don’t get me wrong,” he then reassured her. “I think I have made my feelings very clear.”

Within a few hours, more than 31,000 people had voted and they overwhelming said, “love”, with just 18% choosing loathe.