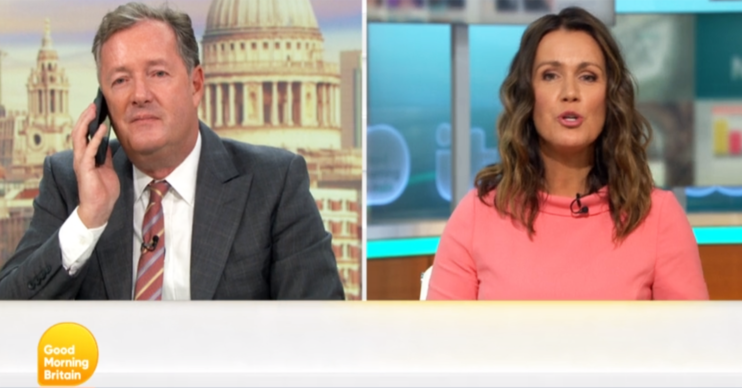 He wished her luck on her first day back at school

Piers Morgan melted hearts on today’s episode of Good Morning Britain (Wednesday September 2) when he telephoned his daughter to wish her good luck on her first day back at school.

The presenter, 55, shocked co-star Susanna Reid when he took the call live on air.

What did Piers Morgan do on air?

Piers not only managed to wish Elise, eight, well but also managed to get in a dig at Susanna, too.

Viewers were left wondering what was going on when the show returned from an ad break and saw Piers talking on the phone.

“Just speaking to my daughter live on air, wishing her good luck for her first day back at school, and all her friends,” he said to camera.

Susanna chipped in with her own message: “Good luck Elise!”

“She’s got a message for Susanna,” he continued, “It’s fine to have fun on things like Strictly, but actually, you’ve got to win. Quite right Elise.”

“He genuinely is talking to his daughter by the way,” Susanna reassured the audience.

What did Piers’ followers say?

Piers, who has 7.6million followers on Twitter, provoked a heartfelt response.

“Loved it when you were on the phone to your daughter live on air, showed you are a family man.”

Another said: “LOL @piersmorgan, talking to his daughter and talking about winning.

Piers was his normal, shy self when he celebrated record viewing figures on the day of his return to the show after his summer break.

“BREAKING: Our first day back on @GMB yesterday was the highest rated show in the programme’s history!” he crowed.

Read more: GMB: Piers Morgan snaps at Susanna Reid as she apologises for him