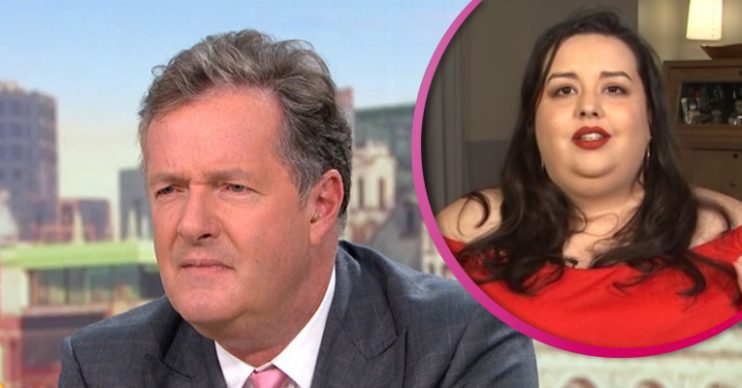 Piers wasn't happy about her comments

Piers Morgan has been called “fat” by a guest on Good Morning Britain today.

Plus-size model Angelina Duplisea, who starred in Miley Cyrus’ new music video causing a heated debate over her appearance, also called for Piers to resign from the daytime show.

In the singer’s music video for her track Mother’s Daughter, Angelina – who is 27 stone – is seen lying naked on a couch while fanning herself.

But it wasn’t long before a row broke out between Piers and Angelina.

Piers argued that the video is “celebrating a dangerous weight”.

Angelina hit back: “If you were really concerned about people being obese and representing something bad, you would take yourself off the air because you’re not exactly slim yourself.”

Angelina continued: “But you’re still fat too,” to which Piers hit back: “Well you may think I’m fat but most people looking at this will not see me as morbidly obese.”

Angelina interrupted, saying: “You’re still fat. You being less fat than me doesn’t make you…” but before she could finish Piers cut in.

“I think if you were really concerned about glorifying obesity, you would take yourself off the air. Period.”

Piers hit back: “But I’m not obese,” to which Angelina said: “You’re fat though.”

Piers ranted: “I’m not though, this is the point. With great respect to you, my body mass index is not 64.6 which is 24 above the morbid obesity level.

“So you can throw it back at me and that’s fine I’m a big boy, in many ways, however, I have a serious point, I think there’s a trend now of glamorising morbid obesity which is dangerous.

“I feel the same way about size 0 models on catwalks, it’s not about an anti-fat person thing. It’s a dangerous weight to be, do you accept that?”

Angelina replied: “Piers I will tell you, I am not healthy. I’m not going to pretend I’m in perfect health. I am 46 years old, I am eight years younger than you, and the health problems I have are more age-related than weight-related.”

Piers added: “I’d like to say I’m a little bit slimmer, healthier and fitter but there is a difference between me and you. I would like you to be honest about this.

“I would not like you to die from morbid obesity at a young age.”

Angelina said: “I’m not worried about living a full life. If I were to die tomorrow, I wouldn’t regret it.”