Reporting on The Oscars at The Beverly Hills Hotel, Piers and co-presenter Susanna Reid were joined by Sharon, her daughter Kelly, blogger Perez Hilton and Dame Joan Collins.

While it was early morning for GMB viewers, because of the time difference, it was late evening for The Oscars Special star-studded panel, and Sharon didn't realise they were on air when she swore while talking to her daughter Kelly Osbourne. 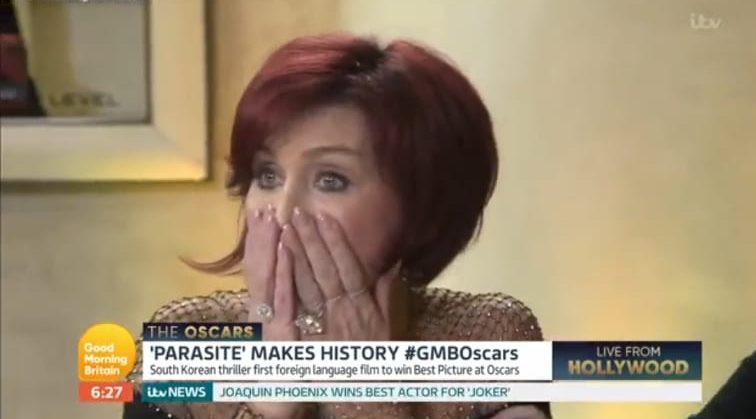 While this isn't the first apology Piers has had to make an on-screen apology, it's one of the few he's had to do about someone else.

When Piers had to issue the "immediate and early apology", Sharon was clearly mortified.

Her hands flew up to her mouth as she apologised profusely, while daughter Kelly could be heard laughing off camera.

You'll be unsurprised to hear it's Osbourne

Former X-factor judge, Sharon interrupted him: "I am so sorry because I didn't know I was on air and I was repeating something director Bong had said to me earlier."

Presenter Piers was mid introduction when he had to stop and say: "We must make an immediate and early apology for some profanity that may have been heard earlier." 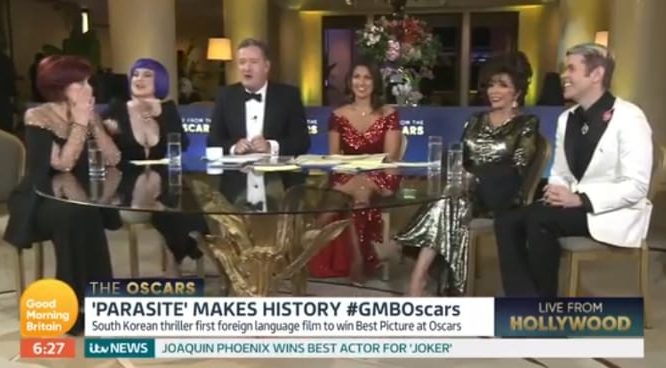 Piers made the apology for mortified Sharon (Credit: ITV)

He went on to joke that the viewers wouldn't be shocked to hear who swore.

"You'll be unsurprised to hear it's Osbourne. Three minutes into Sharon Osbourne's introduction to the programme and we already have to issue an apology."

"Sharon, we need to get through the next two and a half hours without being taken off air."

And, while Piers was quick to apologise GMB viewers were even quicker to point out Sharon turning the air blue.

@piersmorgan @susannareid100 @gmb I wouldn’t worry about Sharon swearing, think you should be asking Kelly to pack her boobs away, not really nice to look at when you’re about to eat your poached eggs #Oscar2020 #Oscars #gmb

One viewer implored presenters, Piers and Susanna to get Kelly Osbourne to cover up instead of worrying about a swear word.

"... I wouldn't worry about Sharon swearing, think you should be asking Kelly to pack her boobs away, not really nice to look at when you're about to eat your poached eggs"

#GMB you don't have Sharon Osbourne on a show without her swearing. It's kind of a given really.

While another professed he wasn't surprised at all.

"...You don't have Sharon Osbourne on a show without her swearing. It's kind of a given really."

One Sharon fan seemed pretty content with the F-bomb: "Sharon's reaction at getting caught out was actually quite funny".

As did this one: "Nice to hear [Sharon's] being her true self when she thought she was off air"

The panel were sharing their views and opinions on all of the winners at The Oscars.

With Parasite's Best Picture win proving the biggest talking point – and not just for the accidental F-bomb - the panel discussed at length the diversity angle throughout The Oscars 2020.

Did you tune into The Oscars? Leave us a comment on our Facebook page @EntertainmentDailyFix and let us know what you think.