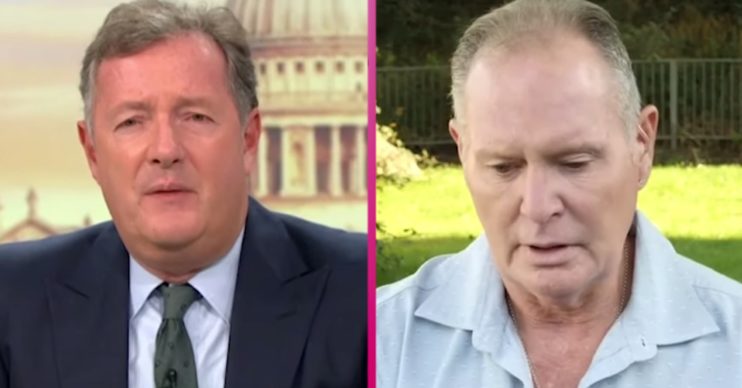 Footy legend Paul lost treasured items and £140,000 worth of property

GMB host Piers Morgan said sorry to Paul Gascoigne after a social media snap may have tipped burglars off he wasn’t at home.

The presenter appealed to thieves to return treasured belongings stolen from Gazza in the raid on today’s show.

It is reported footy legend Paul lost £140,000 worth of property in the theft – including his late dad’s watch.

He pleaded with those responsible to return his father’s watch to him – although other items were also taken.

Thieves also made off with a New York Police Department badge and two steaks from Paul’s freezer.

The sentimental stuff meant a hell of a lot of us.

An emotional Paul reflected: “I was really close to my dad.

“He gave us it… so for it to get stolen… I don’t mind the other stuff, but the sentimental stuff meant a hell of a lot of us.”

Both Paul and Piers both suggested the watch could be returned anonymously if needs be.

Paul continued: “Whoever has got it doesn’t have to own up to it, they could leave it in a bag and leave it somewhere. It’s heartbreaking.”

Calling out the thieves, he continued: “What kind of person does that? You know what he’s been through the last few years.

“If you know what kind of person has done that… I want to know who did that to Paul Gascoigne.”

“Nice people right? To go into the house of a person who’s gone through what he has. So if we can find them, that would be great.”

Piers also explained his fears that a selfie shared by him on social media may have indicated Gazza’s house was empty at the time of the burglary.

A sympathetic Piers was quick to offer his apologies for showing Paul in the audience for the recent filming of a Life Stories interview with Vinnie Jones.

Piers said: “I’m very sorry, Paul, if that has inadvertently put you in this position.

“Obviously I never thought about that for a moment it was great to see you at the recording.”

However, Piers did offer to send Paul a little gift in an attempt to cheer him up.

“I can’t bring everything back for you yet, but hopefully I can bring it a lot of attention,” Piers admitted. He then went on to produce a plate full of premium beef to replace the steaks Gazza lost.

Piers went on: “What I can give you are some steaks. I have a dozen steaks here. We won’t send you these, they’ve been out for a bit… But you like fillet steaks right? I”m going to get you a dozen of the best fillet steaks.

“I won’t cook them for you, that’ll ruin them. At the very least you’ll get your steaks back.”