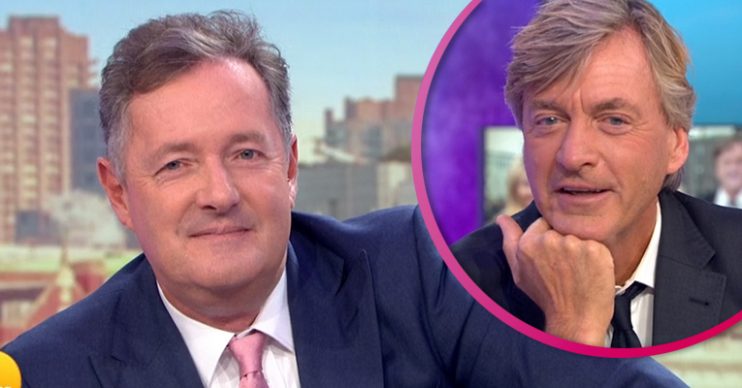 Piers Morgan and Richard Madeley to host GMB together

They shook on it!

Richard Madeley and Piers Morgan have agreed to team up to present Good Morning Britain together.

Piers, 54, co-hosts the show with Susanna Reid and Richard often fills in for the presenter during half-term and over the summer.

Richard appeared on Tuesday’s show to talk about taking part in Channel 4 reality show The Circle.

Towards the end of the chat, Piers said: “Actually you know what? Maybe Richard and I should present one of these together.”

Richard said: “That is a great idea. Shake on it.”

Susanna cut in: “You keep telling me that men are going out of fashion,” to which Piers replied: “This is one way to fight back.”

He continued: “Great Man Britain is coming. I think the viewers would love that. Me and Richard Madeley, the dream team.”

Piers added: “Imagine if it worked and ratings spiked.”

Susanna joked: “I’ll take a couple of million and a payoff and you can get up at 3:50am, marvellous!”

Viewers loved the idea of Piers and Richard hosting together.

One person said on Twitter: “Really good show today. Good to see the nice side of Piers. We knew he had a heart really, and the Morgan-Madeley Bromance.”

@GMB @piersmorgan Really good show today. Good to see the nice side of Piers. We knew he had a heart really 😉, and 💗 the Morgan-Madeley Bromance. 😁#GMB

Another wrote: “Yes you and Richard Madeley would be great together on @GMB.”

A third tweeted: “@piersmorgan @EamonnHolmes Can we have you two and Dickie (Richard) on #Gmb dream team.”

During his interview, Richard spoke about rumours he could do Strictly Come Dancing.

Richard had to dance on The Circle for his co-stars and it involved an epic twerk.

However, the star admitted it was his “worst” moment and that’s why he won’t sign up to the BBC show.

He said: “That was my worst moment because I obviously cannot dance which is why I would never do Strictly. I’d be worse than James Cracknell,” who was eliminated from this year’s competition first.