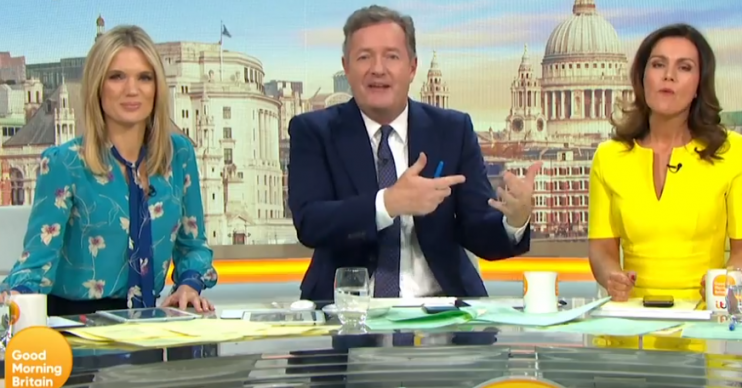 His slip of the tongue amused his co-stars

On Monday’s show, the presenters were talking about Cosmopolitan magazine’s controversial cover of plus-size model Tess Holliday, which has been nominated for cover of the year.

Piers accused Susanna of “fat-shaming” him but said she doesn’t like when he has criticised Tess’ weight.

Piers said: “Susanna does fat-shame me all the time on air and quite rightly, I need to lose a little bit of timber.

“I’m very happy to be fat-shamed but she does that to me, but won’t let me say that 300-pound models are ridiculous.”

Susanna replied: “No because I don’t think people should fat-shame each other.”

Piers hit back: “But you shat-shame… fat-shame me every day,” to which Susanna asked: “I do what?”

‘It shouldn’t be associated with health. It’s just woman on a front cover. So many people exist who are this size’ – Blogger Jess Millichamp thinks Piers is missing the point over his criticism of the magazine image.

Where do you stand on the debate? pic.twitter.com/vBSB5cGLSV

Realising his slip-up, Piers said: “Not shat-shame, fat-shame,” as he burst into laughter.

He added: “If you shat-shame, you’re into Gary Lineker territory.”

Susanna told Piers: “You are definitely going to get a P45 at some stage. And it won’t be soon enough.”

The star was fuming that GMB’s News Coverage nomination wasn’t shown during the awards programme.

He said: “You wouldn’t have known GMB got nominated. We never got mentioned during the two-hour, incredibly boring, show.

“If you sat through that and are still alive good luck to you. How they get through it, those luvvies, I have no idea.”

GMB had been nominated for News Coverage, for its programme Good Morning Britain: On a Knife Edge? and its exclusive interview with Thomas Markle, the father of the Duchess of Sussex.

Piers continued: “It’s a travesty. We were up for half the awards. Good Morning Britain was the first ever breakfast show to be nominated for that coveted award.

“But it didn’t make the main show. Churlish, pathetic and spineless by the BBC. I’m on to you.”

Despite not winning a #BAFTATV Award, Piers is on his usual positive form: ‘I’m a sore loser… we’re serial losers!’ 🏆❌🙈@piersmorgan | @susannareid100 pic.twitter.com/cNEpXXi9ue

Read more: Piers Morgan admits appearing on The Chase was his worst ever moment on TV

He added: “Shame on the BBC. You’ve got to explain yourselves. Just because the rival BBC breakfast show wasn’t nominated.

“We got half of the news coverage nominations. They just airbrushed it out of the whole thing. Like it didn’t happen.”