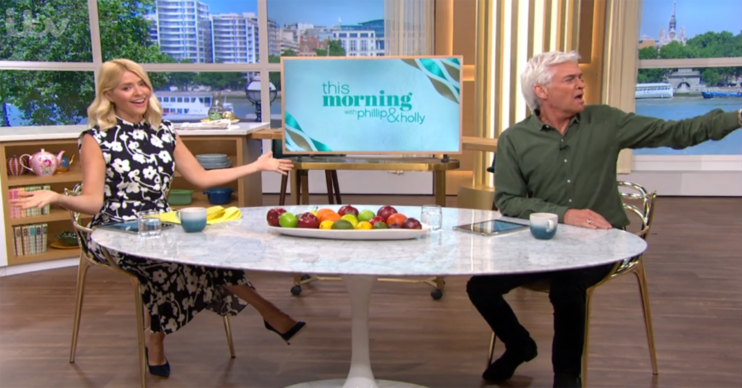 He then accidentally made a rude joke!

TV’s Phillip Schofield jokingly told off a This Morning crew member after a technical blunder.

As the daytime returned from an advert break, the theme tune failed to play properly not once but twice.

The theme song started to play before cutting out and the crew attempted to play it again but failed.

Read more: Holly Willoughby’s sadness over not being able to meet new family member amid lockdown

Phil asked: “What’s up with the drummer?”

The song then played correctly.

Phil exclaimed: “Come on, you’ve got one job! Goodness sake. I think he’s got a loose stool.”

His co-star Holly Willoughby started giggling, as she said: “I don’t want to think about that.”

Phil added: “No one needs to know about that… that’s TMI!”

Earlier this week, Phil jokingly walked off set after Holly suffered a gaffe on air.

The duo burst into laughter when Holly got her words wrong after the Spin to Win segment.

Even though she tried to correct herself, Holly couldn’t manage to make sense of what she was saying.

Come on, you’ve got one job! Goodness sake.

She began: “Right, we’re talking to Joey Essex in just a moment but before we do, another chance for you to win.”

She then expected Phil to carry on where she left off and stood there in silence.

Phil started giggling as Holly realised her mistake and continued: “And there’s a prize worth over £135,000…” before collapsing into giggles.

She then gasped and covered her mouth, exclaiming: “I just read loads of numbers!” as Phil raised his eyebrows and started to walk off.

Holly concluded: “One hundred and thirty five thousand pounds up for grabs and Josie’s got all the details.”

The pair are still hosting the daytime show from the studio amid the coronavirus pandemic.

The show is considered essential by Government because it’s providing information on the crisis.