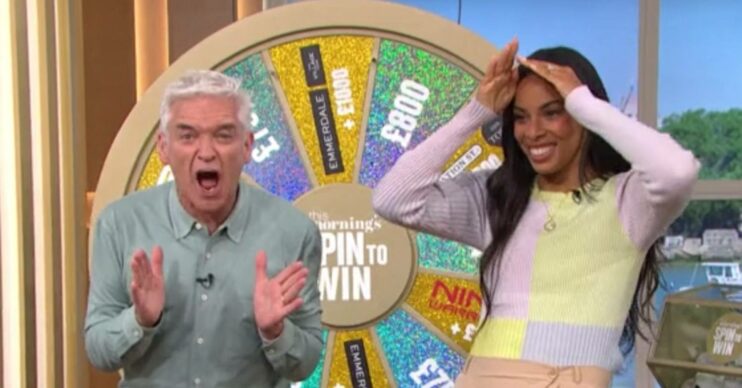 Frustrated Phil hollered and indicated show was 'tight for time'

Phillip Schofield was slammed by This Morning viewers on Twitter for being “rude” to a Spin to Win contestant.

Presenter Phillip, 60, seemed exasperated with the game on Wednesday’s (May 11) show and keen to move on to interview guest Richard Osman.

But contestant Bob seemed to mishear or misunderstand one aspect of the game that left Phillip screaming with frustration.

Phillip Schofield on This Morning today

Ahead of the competition segment, Phillip indicated it might be necessary to be “ruthless” if contestants didn’t immediately answer the call from the ITV daytime show with the required password.

Both he and Rochelle Humes seemed relieved however when the first person they called picked up and said: “Izzy wizzy, let’s get busy.”

That meant they didn’t have to move onto another call and hope whoever answered adhered to the qualifying rules of the game.

However, after player Bob said the words the presenters wanted to hear, the game took a turn.

Hearing an echo of the show feedback through the call, Phil instructed: “Turn the telly down, Bob. Bob!”

But then the call went dead, visibly irritating Phillip who believed Bob hadn’t heard him at all.

“He’s gone. Has he gone? We’ve lost Bob. He’s hung up. He didn’t think it was him,” Phillip lamented.

“We need to call him back,” interjected Rochelle.

“You know why? Because he was watching the telly and thought, it’s not me,” Phillip reasoned for Bob putting the phone down.

With his hands on his hips, Phillip complained how they were “tight for time” as the item overran.

This game has gone wrong in every conceivable way.

Luckily, however, producers got Bob back on the line and he said the password correctly again.

Not so luckily, he said it three times in a row as Phillip begged him to do as he requested.

“This game has gone wrong in every conceivable way,” Phillip ranted in a bemused Richard’s direction.

‘Let’s get this done’

As Rochelle looked on smiling awkwardly, Phillip’s volume increased until he was bellowing at Bob to turn the TV down.

Another raised voice – which turned out to belong to Bob’s wife – then shouted back: “We have!”

And at that point Phillip and Rochelle seemed determined to put the segment to bed and move on to former Pointless host Richard.

“Let’s get this done,” Phillip muttered.

“We’re eating into Richard’s time here and the format isn’t that good.”

“I’m absolutely exhausted,” Rochelle commented after the presenters rushed through the game which saw Bob win £1,000.

How viewers reacted to Phillip Schofield on This Morning

Several viewers made mention on Twitter how very unimpressed they were with Phillip’s approach.

Someone else agreed: “Phil is so rude @thismorning #ThisMorning.”

And another observer suggested they’d never permit Phillip to address them in a similar fashion.

They wrote: “If Schofield screamed at me like that I’d tell him to Foxtrot Oscar and hang up! Rude git! #ThisMorning.”

However, among the tweeted moans, one Twitter user stuck up for Phillip.

Indeed, they suggested he had shown restraint with his responses.

They claimed: “People are calling Phil rude but I admire him for not swearing.

“How many bloody times does he have to tell people to turn the TV down? I’m angry just flipping listening to it #ThisMorning.”