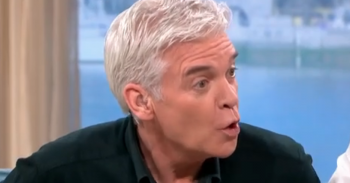 Could Amanda Mealing be heading for Strictly instead?

This Morning presenter Phillip Schofield could barely believe his ears when actress Amanda Mealing revealed why she has no intention of taking part in Dancing On Ice.

Incredulous Phil, 56, wrapped up a chat with the Casualty star earlier today by asking whether Amanda would be up for being on a reality series.

Questioned first about whether she’d sign up for Strictly Come Dancing, the Connie Beauchamp performer admitted the series was a guilty viewing pleasure.

“Masterchef and Strictly are the only ones I watch,” the 51-year-old replied.

Read more: Ant McPartlin will return to I’m A Celeb this year alongside Dec Donnelly

“Strictly, you’re welcome!” Phil pantomimed, making out as if he’d done the BBC a favour by persuading Amanda to get involved.

But the host – who also fronts DOI along with Holly Willoughby – became even more animated when he pretended to tap her up for the ITV celebrity skating competition.

“I take it you can’t skate?” he enquired, before both he and stand in co-host Rylan Clark-Neal almost fell off the sofa with mock shock.

Smiling, Amanda hesitated before admitting she’d be hot stuff on the ice.

“I used to be an ice skater,” she began modestly.

Amanda continued: “Point 5 off a mark of being a junior champion… No, it wouldn’t be fair would it?”

Rylan chipped in, hilariously: “Forget about them, think about yourself, love! Don’t worry about that lot!”

Fans were also tickled by the moment, with one fan tweeting: “I thought it was funny she said it would be unfair to appear on #DancingOnIce as she’s already too good. No! Please do it Amanda!”

Another added: “Amanda Mealing paused and awkwardly smiled when Phil asked if she would do#Strictly. Does that mean she’s signed up?”

Earlier during the chat, Amanda spoke passionately about how she has swapped working in a TV hospital to helping out with medical efforts in Africa.

Detailing how she had been on a life-changing trip with charity Water Aid, the actress also revealed she had helped establish health centres in Ghana.