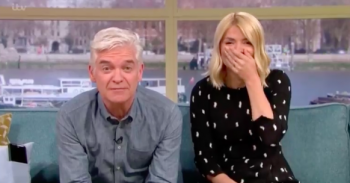 Phillip Schofield and Holly Willoughby couldn’t believe the chaos that ensued when they welcomed Celebrity Juice stars Keith Lemon and Paddy McGuinness onto the set.

On Wednesday morning (March 13), the ITV hosts were left speechless and giggling uncontrollably when the comedy duo behaved like puppies – breaking the set, wrestling and generally misbehaving!

They appeared on the morning show to discuss the upcoming series of ITV2’s Celebrity Juice, where Holly is also a team captain, and things soon got silly. Very silly indeed.

Keith and new team captain Paddy – who has replaced Fearne Cotton – got into bed with each other, before guest Kelly Brook was ‘persuaded’ to join them.

Kelly had been hosting a furniture segment, when Paddy and Keith lay waiting to surprise her in a single bed – and then proceeded to pull her onto the bed to join them!

Within seconds, the bed had collapsed after having all three adults on top of it!

Despite the apparent damage, Keith continued to bounce around on it with no regard for the furniture segment, which had been ruined.

Phillip looked on in mock horror, as Holly watched with her hand covering her mouth in shock.

Holly questioned: “What have we done? I mean this is a complete disaster.”

Remind us never to invite Keith and Paddy to come around ours!

Fans watching from home weren’t impressed, blasting it all as immature.

One tweeted: “Ah thank god I don’t have to sit and watch #ThisMorning, Keith Lemon is on, I’m missing literally nothing.”

Ah thank god I don't have to sit and watch #ThisMorning Keith Lemon is on, I'm missing literally nothing

This "interview" with Keith Lemon & Paddy McGuiness is shambolic. And giving me a headache #ThisMorning

How the talentless and terminally unfunny Keith Lemmon has managed to steal a living from television for so long is one of the great mysteries of the modern age. #thismorning @thismorning

I will never, but ever understand why tv execs ever thought that Keith lemon and Paddy Mcguiness were funny. Let alone together. #thismorning

Keith Lemmon and Paddy McGuinness have to be the funniest double act on TV. Said no one ever. #ThisMorning

Keith Lemon & Paddy McGuinness at 12.15 or switch over to Bargain Hunt? 🤔

Bargain Hunt it is then #ThisMorning

Another said they “couldn’t stand Keith Lemon”, while a third added: “Keith and Paddy… No likey. I’m off to #BargainHunt. Bye bye #thismorning.”

“This ‘interview’ with Keith Lemon and Paddy McGuinness is shambolic. And giving me a headache,” blasted another.

Looks like Bargain Hunt got quite a few new viewers today!

Do you enjoy watching Keith Lemon and Paddy McGuinness? Leave us a comment on our Facebook page @EntertainmentDailyFix and let us know what you think!