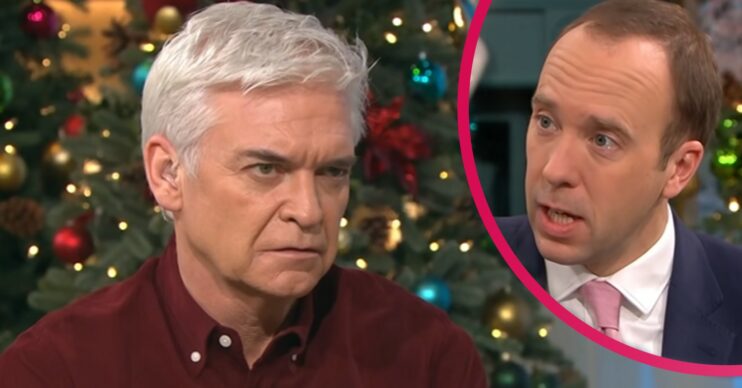 Mr Hancock appeared on This Morning on December 7

Phillip Schofield has reportedly sparked Ofcom complaints with his comment to Matt Hancock on This Morning.

On Tuesday (December 7), the former Health Secretary appeared on the daytime show to talk about dyslexia, which he has.

Mr Hancock spoke about the possibility of screening all children for the learning difficulty.

What happened between Phillip Schofield and Matt Hancock?

However, host Phil came under fire from viewers after he made a quip about Mr Hancock’s dyslexia.

Phil asked him: “Was it your dyslexia that meant you misread the social distancing rules?”

But, Mr Hancock replied: “No. I can’t blame that on dyslexia or anything else. That was a mistake and I’ve apologised for it.”

One person said: “Disappointing that he went on to raise awareness about dyslexia, and it had to be bought back to what he did with a very insensitive question.”

In addition another ranted: “This is a very patronising and damagingly uneducated question to ask.”

Meanwhile, according to reports, viewers have now complainted to TV watchdog Ofcom about the interview.

A source told the Mail on Sunday: “It has become clear that a lot of complaints have been made to Ofcom over this. It was a clear example of disability-shaming.

“While some may have found it funny, those who have dyslexia find it utterly insulting.

“It was a cheap shot that offended many people, and Holly didn’t appear to be very happy about it either.”

The public were furious that he had cheated on his wife Martha as well as breaking COVID-19 social distancing rules.

He resigned from his position as Health Secretary in June.