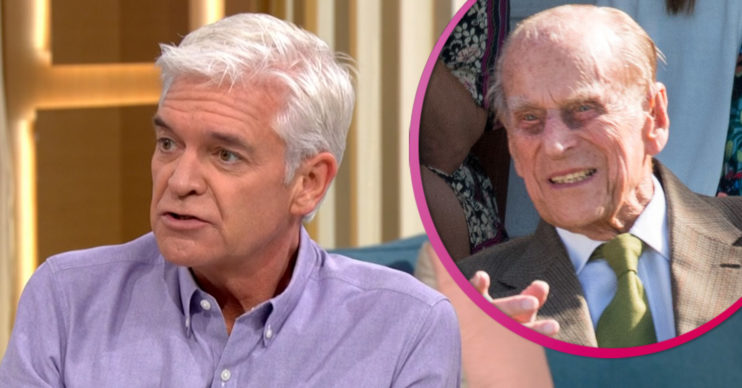 Phillip recalled the moment he spoke to the Duke of Edinburgh

TV’s Phillip Schofield has revealed Prince Philip jokingly called him an “idiot” during an interview.

On Wednesday’s This Morning, Phil and Holly Willoughby paid tribute to Philip to celebrate his 99th birthday today (June 10).

Phil recalled the moment he spoke to Philip, 99, during the 60th anniversary of the Duke of Edinburgh Award.

“As I told him I’d done the wing walk we chatted about that for a bit and then he wandered off.

“Someone said to me in the crew, ‘he’s beckoning you over.'”

Phil continued: “I walked over and he said, ‘I wanted to introduce you to this man. He’s jumping out of a plane, you’re walking on top of it.

Meanwhile, members of the royal family have sent messages to Philip to mark his birthday.

To mark the occasion, the palace released an official picture of the Duke with the Queen.

The new image was taken last week in the quadrangle at Windsor Castle, where the Queen and Prince Philip are isolating together.

“Swipe to see a new photograph of Her Majesty The Queen and His Royal Highness The Duke of Edinburgh, released by the royal family to celebrate his birthday today.”

It was captioned: “Wishing The Duke of Edinburgh a very happy 99th birthday!”

According to reports, Philip is planning a low-key day of celebrations.

Due to social distancing, Philip will reportedly chat with his grandchildren and great-grandchildren via video call or phone call.