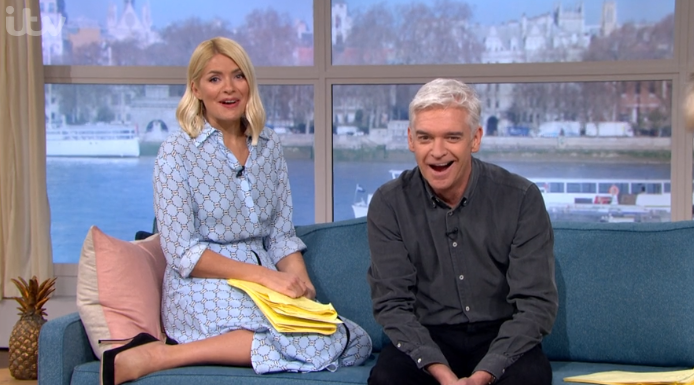 Holly wasn't keen on George the pig at all

Viewers of This Morning were left in hysterics today when Phillip Schofield kissed a PIG.

Phil and Holly Willoughby interviewed Ingrid Tarrant, who has swapped her husband for a 15-stone pet pig called George.

But while Phil didn’t mind getting close to George – even giving him a kiss – Holly wasn’t keen and even climbed over Phil on the sofa to get away from the animal.

She said: “I have a little live rule – anything bigger than a medium sized dog I’m instantly a bit wary of.”

As George started to get closer to Holly, she got up and climbed behind Phil to get on the other side of the sofa.

I can’t help it, I’m just not very good with stuff like this.

The presenter then spoke to Ingrid as Phil entertained George with fruit.

Ingrid explained that her pigs are very hygienic, adding: “They poo and wee as far away from where they live.

“Where home is, they recognise it’s home. If I lived in a bungalow I would definitely let them [sleep in my bed].”

As Phil tried to get George closer to Holly, she admitted: “You’re so wicked! I can’t help it, I’m just not very good with stuff like this.”

Phil said: “He might bite my face off,” to which Ingrid insisted: “No I don’t think so.”

Phil asked: “You don’t think he will.”

Bending down towards the pig, Phil said: “George… kissy kissy. Kissy kissy George,” as the pig looked up and put his nose against Phil’s mouth.

Have you got any strange house pets? Maybe there’s a goat who lives with you, or a chicken who doesn’t like to live outside? Let us see those pics! 🖼 pic.twitter.com/0BSVnwrjhk

Holly said: “That’s quite sweet,” to which Phil suggested: “You have a go.”

Holly said: “No way! I’m absolutely fine. I’m sort of getting more fond of him, I just didn’t know what he was going to be like.”

Viewers were in fits of laughter over Phil kissing George.

Did @Schofe just kiss a pig live on TV? #ThisMorning

Watxhing phill crawl on the floor and kissy kissy a pig is highlight of my day 😂😂 @thismorning #ThisMorning pic.twitter.com/w60KfiThrG

@Schofe is having so much fun with that pig. 😂 #ThisMorning

Others weren’t impressed with Holly’s behaviour towards George.

ffs Holly its only a pig…. #thismorning