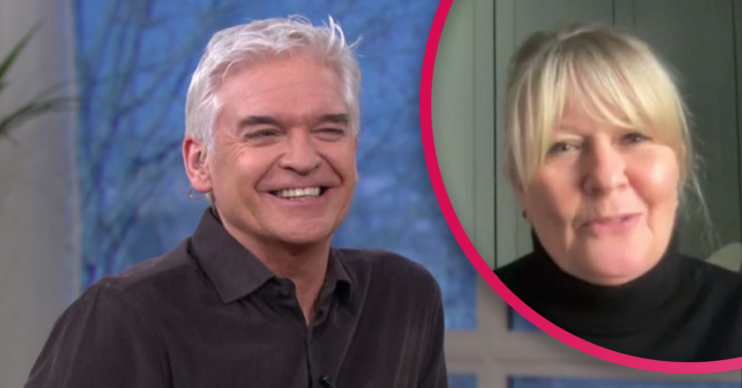 This Morning host Phillip Schofield and wife Stephanie Lowe married in 1993 and, after he came out to TV partner in crime Holly Willoughby in February 2020, he revealed she had been an “incredible” support.

But are the couple still married? Or have they divorced following Phil’s confession that he is gay?

Read on for all the details, and the This Morning host’s epic rise to fame.

Speaking to Holly on This Morning when he made his announcement, Phil acknowledged the hurt he caused his family.

He revealed: “This is something that has caused many heartbreaking conversations at home.

“I have been married to Steph for nearly 27 years and we have two beautiful grown-up daughters, Molly and Ruby.

“My family have held me so close. They have tried to cheer me up, to smother me with kindness and love, despite their own confusion.”

And, it seems, that has continued almost two years down the line, despite Phil reportedly moving out of their family home.

Back in March 2021, Phil revealed he and Steph hadn’t discussed divorce.

Speaking on Chris Evans’ podcast, he said: “I’m still married to Steph. There is a great deal of talk of divorce – we have not discussed that at all.”

How many children does he have?

Phil and Steph have two daughters, Molly and Ruby.

Back in July 2021, the family gathered to celebrate Molly’s birthday, with Phil sharing a throwback snap of the foursome on social media.

Is Phillip Schofield in a relationship with a new partner?

Phil said there was no one else involved in his decision to come out as gay.

Since the announcement, he has kept his private life private.

As a result, it’s not known if he is currently seeing someone.

How old is Phillip Schofield?

Phillip Bryan Schofield was born on April 1 1962, meaning he turns 60 this year.

His dad, Brian, died in 2008 from a long-standing heart condition.

Phil is very close to his mum Pat, speaking about her frequently on This Morning.

The star has a brother, Tim, who he posts about on social media very occasionally.

How did Phillip Schofield become famous?

Phillip, who turns 60 in April, started out as a bookings clerk and tea boy at the BBC at the age of 17.

He was the corporation’s youngest employee at the time but moved to New Zealand with his family two years later, where he made his presenting debut on youth music show Shazam!.

In 1985 he returned to Britain and landed his role on CBBC, taking up his role in the infamous Broom Cupboard with Gordon the Gopher.

Phil moved away from kids’ TV in the early 1990s, with shows such as Schofield’s Quest and Schofield’s TV Gold and Talking Telephone Numbers.

In 1991 he also made a move to the West End stage, playing the leading role in the musical Joseph and the Amazing Technicolour Dreamcoat.

He even released a single from the musical, Close Every Door, that made it to number 27 in the charts.

Schofe then turned his attention to quizzes, fronting the National Lottery Winning Lines and Test The Nation with Anne Robinson.

Back in February, the This Morning host celebrated a whopping four decades in the industry.

He was honoured in a This Is Your Life-style show on Lorraine, which featured his wife Stephanie and daughter Molly.

Speaking about Phil’s key to having a successful 40 years on the TV, Steph said: “I don’t have a clue!

“No, I think your previous guests have hit the nail on the head, he is genuinely interested in people and he’s always reading the news and he’s always keeping up on everything.

Steph then joked: “Oh yes, I need him to keep working!”

Phil also addressed the changes in his family since his announcement that he is gay.

He said: “We’ve obviously, clearly, had changes in our lives and I’ve said it’s always us four but slightly different.”

When did he join This Morning?

Phil joined the The Morning family as one of the show’s presenters in 2002.

He joined to replace John Leslie, presenting alongside Fern Britton until she left the show in 2009.

Holly Willoughby joined in September of that same year, with the pair forging one of the longest-running partnerships in British TV history.

The pair originally started working together in 2006 on Dancing On Ice, fronting that together on ITV on Sunday nights.

It made its comeback in 2020, though, and is still going strong.

He’s presented ITV’s coverage of Prince William’s wedding, provided the voiceover for Educating Joey Essex, been the subject of This is Your Life and hosted 5 Gold Rings and How to Spend it Well.

Phil’s also had a cameo in Coronation Street, and produces his own wine.

How much is Phillip Schofield worth?

As of April 2021, Phil was reported to have a net worth of £8.7 million according to Celebrity Net Worth.

His partnership with Craft Gin Club is said to have earned him another £60,000.

His autobiography, which came out in October 2020, has netted Phil around £1.45m.

It’s thought he’s pair around £1m a year for his work with We Buy Any Car and he’s also signed a “lucrative” deal with Lloyds.

Phil isn’t shy about splashing his cash, though.

After moving out of the family home it’s reported that he now lives in a £2m house in Chiswick, West London.

This Morning is on ITV weekdays at 10am.