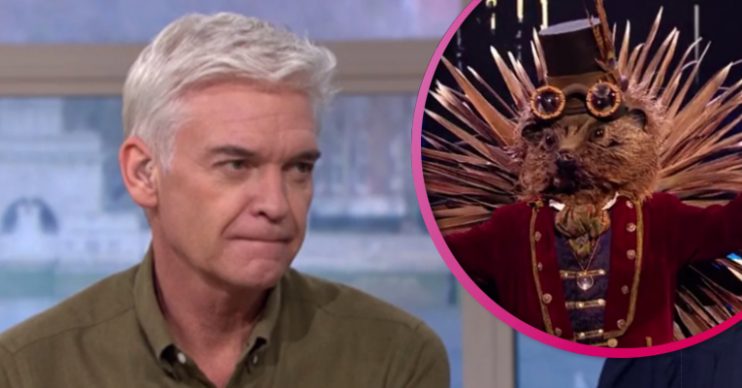 Playing his cards close to his chest

With only five celebrities left to unveil on ITV’s smash-hit The Masked Singer, speculation has been rife about who could be underneath the remaining costumes.

One character left is Hedgehog, and on today’s episode of This Morning (Monday February 3 2020), host Phillip Schofield addressed the rumours that he could be the person under the spiky costume.

There have been several rumours concerning the identity of Hedgehog, with Michael Ball and Jason Manford being many viewers’ guesses as the man behind the mask.

But on Saturday’s show (February 1 2020), guest judge Sharon Osbourne went off in a completely different direction and suggested it might be the This Morning host.

On today’s show, Phil, 57, was talking to showbiz correspondent Kem Cetinay about the speculation.

Kem said he didn’t think it was Phillip.

Phil hasn’t been the only This Morning presenter rumoured to be on The Masked Singer.

Two weeks ago, Holly Willoughby was linked to Octopus.

Octopus is yet to be revealed, but on Saturday night’s show there was a double elimination where two characters were unmasked.

Duck was revealed to be Skunk Anansie singer, Skin.

Her unmasking shocked the panel, which included Sharon and Kellie Osbourne.

Taking off her mask, Skin said: “Kelly, I’ve toured with you!”

To which Kelly replied: “I cannot believe I didn’t get that! My mind is blown!”

Scissor Sisters singer Jake Shears was revealed to be Unicorn in the show’s second elmination.

Asked why he chose to do the show, he said: “I’ve been having so much fun. I can’t keep my arms down. I mean, the show is right up my alley.

“It’s a no brainer for me. I was so excited. It’s been an absolute blast.”