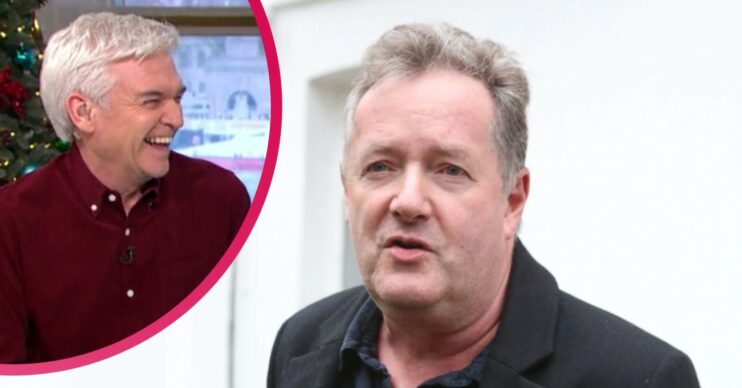 Phil's gag is truly a cracker!

This Morning viewers were in hysterics earlier today (Tuesday December 7) after Phillip Schofield cracked a gag about Piers Morgan.

And although the Piers punchline relates to events at the start of 2021, co-host Holly Willoughby and show guests couldn’t help but snigger at the cheeky dig.

Phillip’s wisecrack came as he, Holly and guests Gyles Brandreth and Vanessa Feltz shared some rib-ticklers.

Gyles had already offered up: “Why is Rudolph self-isolating? As he failed his lateral glow test.”

Phil’s joke, however, had a little more sting to it – leaving Vanessa looking shocked and holding her face in her hands.

Gyles, however, gave the gag the double thumbs up.

What was the joke Phillip Schofield told about Piers Morgan?

Looking down as he read the joke out, Phillip asked: “What’s Piers Morgan’s favourite Christmas song?”

He then sing-songed to The Snowman tune, before anyone else could reply: “He’s walking off on air!”

The punchline referred to Piers’ infamous flounce off the Good Morning Britain set after he rowed with Alex Beresford about Meghan Markle.

Holly smiled: “Shall we end it there? I think we’ve peaked.”

Going by the social media reaction, viewers laughed their heads off at Phil’s gag.

Twitter posts reacting to the joke included many different kinds of laughing emojis.

Read more: Holly Willoughby fans adore the sequin skirt she wore on This Morning – but are shocked by the price

And another person repeated the joke, tagging in both Piers and Phillip as they added: “Love it, lol.”

A third person also repeated the witty line and included a GIF of Piers stropping off set.

But in response to another tweeter, someone else replied in a friendly manner: “Get your coat!”

Piers has yet to react on social media.

This Morning airs on ITV on weekdays from 10am.