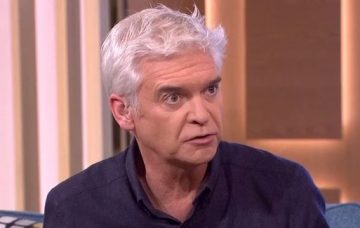 Phillip Schofield made an awkward blunder about Bradley Walsh on Tuesday’s episode of This Morning.

The 55-year-old had been discussing recent the recent allegations about Sir Bradley Wiggins, when he confused cyclist Wiggins with The Chase host Walsh.

Er, not something you really expect to happen, right? 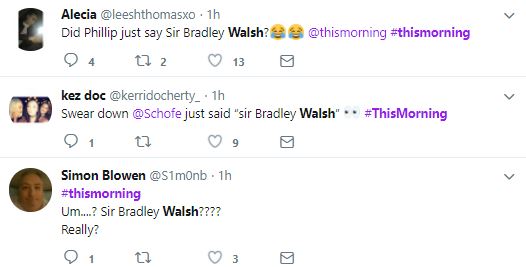 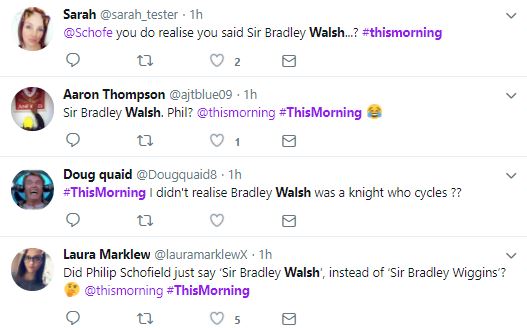 And clearly someone let Phil know his error as he later told viewers after an ad break: “Welcome back. I may have accidentally named Bradley Walsh in that last interview. Slip of the tongue.”

A giggling Holly Willoughby joked: “Well, he deserves it.”

Phillip agreed, referencing Bradley sneaking on stage with This Morning’s team at the National Television Awards in January.

Phillip and Holly may have giggled about the error, but the actual story about Sir Bradley Wiggins is no laughing matter.

The Olympic medallist, who has asthma and allergies, has been accused in a report by MPs of using a medication allowed under anti-doping rules to enhance his performance, rather than just for medical purposes.

He was given a TUE – therapeutic use exemption – to use a particular medicine back in 2011 because of his asthma and allergies.

But the medicine also has performance-enhancing qualities.

Sir Bradley Wiggins has vehemently denied the allegations, telling BBC News: “I refute that 100 per cent. This is malicious, this is someone trying to smear me.”

He said the medication was used purely for health issues, not enhancement.

“I find it so sad that accusations can be made, where people can be accused of things they have never done, which are then regarded as facts,” he said in a statement.

“I strongly refute the claim that any drug was used without medical need.”

Have you ever got someone confused with someone else? Leave us a comment on our Facebook page @EntertainmentDailyFix and let us know!