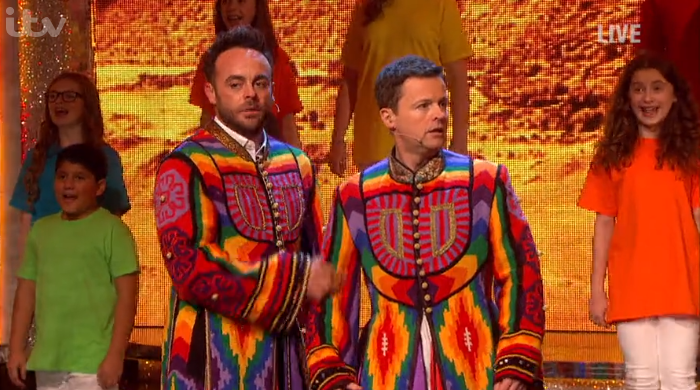 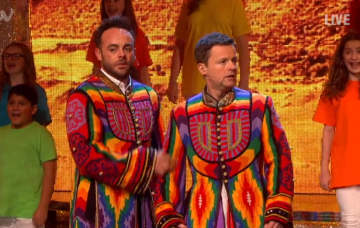 Only this dream will do

Every time we think we’ve seen Phillip Schofield peak as a national treasure, he goes and one-ups himself!

The silver fox popped up on last night’s Saturday Night Takeaway, in the most unexpected way imaginable.

To celebrate the legend of musical theatre, Lord Andrew Lloyd Webber, turning 70 this year, Ant and Dec had arranged a musical spectacular.

It climaxed with a medley of some of theatre’s greatest hits, including Alexandra Burke singing songs from Cats while Dec larked around dressed as a cat in the background.

Ant then came out dressed as the Phantom of the Opera and prowled around the stage!

The Geordie pair do have some history with music after all, having chart success as PJ and Duncan in the 90s.

The grand finale saw Joe McElderry take to the stage to belt out Any Dream Will Do from Joseph and the Technicolour Dreamcoat.

Fans were loving it, especially when first Ant and Dec joined in with the song – followed swiftly by fellow guest James Corden, owner of a fine pair of pipes himself.

But the studio audience had no idea what they were about to be treated to! As the song reached its climax, the scene was well and truly claimed by Pip himself.

He appeared from the back of the stage, dressed in the famous coat, to roar out the lyrics.

Readers of a certain age, of course, will remember that Phillip won rave plaudits for his performance in the role more than 20 years ago, at London’s Palladium.

And he stole the show last night, with the studio audience giving him a standing ovation before he’d even finished his first sentence.

Unsurprisingly, viewers at home were also amazed, with one writing: “I started screaming and running around my room when Phillip Schofield came on as Joseph on #SaturdayNightTakeaway.”

Another said: “Phillip Schofield singing has just made my night.”

Phil himself took to Twitter later on in the evening to thank his fans and viewers for their reaction to his appearance.

He wrote: “Thank you for you lovely tweets guys! That was such fun #SaturdayNightTakeaway x.”

It was definitely one of the most memorable Saturday Night Takeaway moments we’ve ever seen.

What a way to celebrate the 101st episode, and Andrew Lloyd Webber’s 70th!

The only problem now is – how are they going to top it next year?! Maybe they’ll get Phil AND Holly on stage to perform a duet?

Did you enjoy Phillip’s surprise performance? Leave us a comment on our Facebook page @EntertainmentDailyFix and let us know what you think!