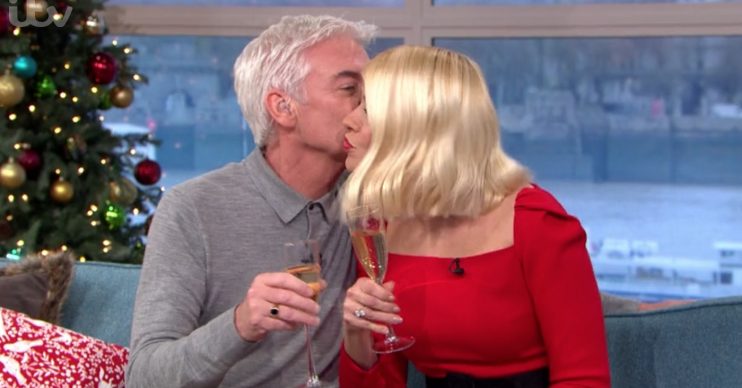 They may be embroiled in rumours of a ‘feud’ but This Morning presenters Phillip Schofield and Holly Willoughby looked like best friends in today’s episode (12.12.19).

As they signed off for the Christmas holidays, Phil kissed his presenting partner and put his arm around her.

The Daytime TV couple cosied up on the sofa in what was their last show before their Christmas break.

“Well, that is it from us for today and this year. We’re not here tomorrow because of the General Election coverage,” Phil, 57, said.

We hope you have a wonderful Christmas and we will see you in the New Year.

Holly, 38, continued: “Eammon and Ruth are back with you on Monday, but we hope you have a wonderful Christmas and we will see you in the New Year.”

And Phil signed off by saying: “Yes, for a longer show we’ll see you at 10am on Monday, January 6. So, merry Christmas. Bye now!”

He then planted a smacker on her cheek and wrapped his arm around her.

Earlier today, Holly shared an image showcasing her rather festive outfit for the programme.

She said that she was “dressed as Mrs Santa Claus” and looked excited for the festive break in a stunning red dress.

All the Yuletide bonhomie is a far cry from the reports that circulated Phil and the team this week.

Reports claimed that Phil and Holly’s relationship had ‘become strained’, while fellow This Morning presenter, Ruth Langsford, was also said to have filed an official complaint against Phil.

ITV hit back at the claims, calling the reports ‘malicious gossip’.