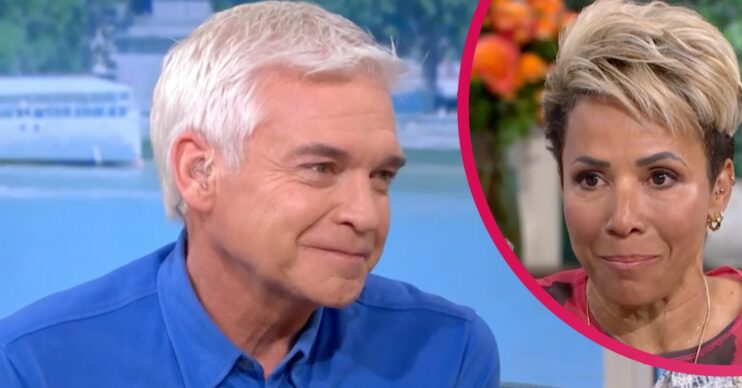 Dame Kelly Holmes came out as gay this weekend

Phillip Schofield become emotional as Dame Kelly Holmes spoke about having to hide her sexuality for years.

The emotional This Morning interview comes just days after the former Olympian came out as gay.

During the chat, Kelly heartbreakingly admitted she doesn’t feel like she’s “ever been happy” or “lived her life”.

The former Olympic athlete revealed that she had hidden her sexuality for 34 years. She confessed that she had realised she was gay when she was a soldier in the Women’s Royal Army Corps aged 17 in 1988.

Today, Holly Willoughby and her co-host, Phillip, welcomed Kelly onto This Morning for her first public interview since coming out as gay.

When asked how she felt about coming out, Kelly said she felt a mixture of “relief and apprehension”.

“I needed to talk about this for myself and my own wellbeing and my own mental health,” she said. “The documentary was a way of me articulating the fear I’ve had for so many years.”

What else did Dame Kelly Holmes say?

Dame Kelly then opened up about being gay in the army – during a time where it was illegal to be so.

“You’ve read about the rules of homosexuality in the army – that it was illegal to be gay,” Kelly said.

“And yet you can’t change who you are,” she continued. “So I grew up with that fear in my head, because I absolutely loved being a soldier in the army.”

Phil, who came out as gay in 2020, then asked Kelly about the effect it had on her mental health.

She bravely said: “I became a self-harmer, I didn’t want to be here frankly at some point in my life.

“2020 I had a really bad breakdown and I knew if I couldn’t release it I didn’t know what I was going to do so I had to do it.”

Kelly tearfully spoke about her mental health struggles and Phillip then started tearing up too as Holly supported him.

He struggled not to cry as he recalled how he commented on Kelly’s recent Instagram post not to be scared.

“I am relieved to finally do it but it’s hard to unravel everything. Responses are really helping me,” she said.

“It’s that release and the final thing of releasing myself to have my life because I don’t feel I’ve lived my life,” she continued.

Kelly said she now feels like she can be happy.

She added that she hopes that she can change things and make sure people don’t live in fear of being gay.