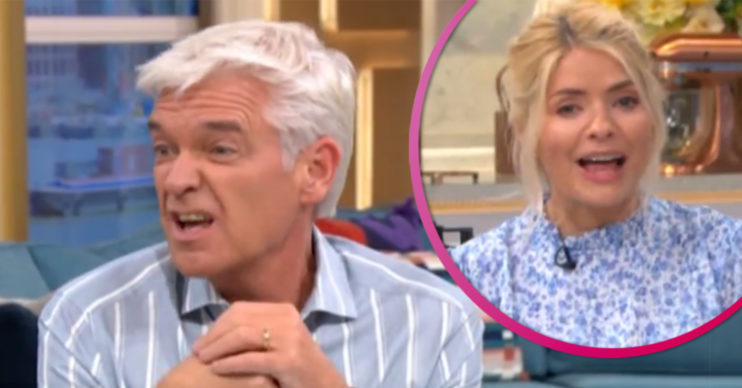 TV’s Phillip Schofield has jokingly called out Holly Willoughby after noticing one of her habits on This Morning.

The pair were discussing their habits during a phone-in segment with Vanessa Feltz as viewers called in to ask if they were being unreasonable.

Holly, 39, said she has a “slightly clicky jaw” and it irritates her husband Dan Baldwin.

However, much to Holly’s surprise, Phil revealed he’s noticed the habit too.

“Sometimes it makes a noise and he goes ‘are you kidding me’, I can’t help it.”

He said: “I’ve noticed it a few times and it really is quite noisy.”

Phil joked: “Frankly, it annoys me.”

Phil asked: “Vanessa, am I being unreasonable?”

Does it? Oh no, look what you’ve done.

Agony aunt Vanessa replied: “No you’re not, you have to work together every day, you’ve got no choice.

“But if you want the relationship to last more than seven months, and you want it to survive, just take yourself away from the arena of conflict.”

Phil joked: “I miss the clicking, we sit so far away from each other now.”

Holly said: “It will be back, don’t worry about it.”

Back in April, Holly admitted she had discovered her husband’s habit during lockdown.

What was the habit?

She said: “Dan is working from home and I’ve discovered something I didn’t know before that’s really annoying.

“He taps and types really loudly, there’s no reason to hit those keys as loudly as he does.

“I’m like, ‘Shut up! Don’t do that.’ Especially when he brings the laptop into bed and he’s sat there writing an email.”

Phil then asked: “What do you do that annoys him?”

Holly said: “I’m practically perfect in every way so clearly I do nothing.”