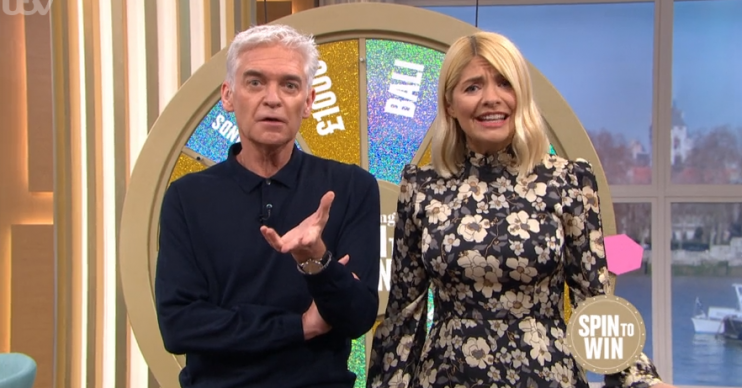 TV duo Phillip Schofield and Holly Willoughby apologised after a viewer swore on This Morning.

The show’s Spin To Win competition segment descended into chaos today when Holly and Phil struggled to get a viewer to answer the phone correctly.

The viewers had to simply answer the call and say the password – goldfish – in order for a chance to win cash or a holiday.

One caller, Louise, answered the call but said “it’s me” to which Holly told her: “No that’s not the password. Hang up, Louise one rule!”

Louise can be heard saying: “[Bleep] hell,” as Phil and Holly gasped.

We get cross but perhaps you don’t get quite so cross.

Phil told viewers: “So sorry if she swore there… that’s what I’d say,” to which a giggling Holly added: “Let’s try again. We get cross but perhaps you don’t get quite so cross.”

The segment continued to become more chaotic after several callers in a row failed to answer the phone or say the correct password.

But eventually one viewer, Karolina, answered the phone and said the right password leaving Holly and Phil over the moon.

But when it came to a question, Karolina failed to answer it correctly and Holly collapsed onto the floor.

Karolina was asked to give the colour of the infamous Only Fools and Horses three-wheeled van, which was inside the studio at the start of the programme.

She first answered “green,” as Holly jokingly fell onto the ground with laughter.

The hosts then gave her a second chance but Karolina answered wrong again, claiming it was brown.

#SpintoWin brings out all kinds of emotions in @hollywills and @Schofe!

The hosts then spun the wheel and Karolina won a seven-night trip to Bali.

Many viewers found the segment hilarious while some called for it to be axed.

One person wrote on Twitter: “Spin to win is a total disaster!” while another said: “‘Spin to win’ competition descending in to chaos on This Morning.”

A third added: “Spin to win cracks me up! #ThisMorning why enter if you don’t pick up the phone!”

Spin to win is a total disaster! #ThisMorning

“Spin to win” competition descending in to chaos on This Morning. #ThisMorning pic.twitter.com/sSdJyt2CZy

Spin to win cracks me up! #ThisMorning why enter if you don’t pick up the phone!