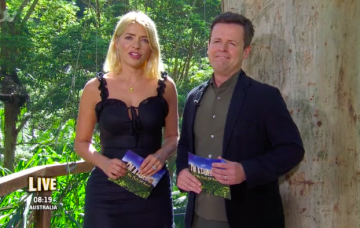 She's been filling in for Ant McPartlin

Phillip Schofield has warned I’m A Celebrity… Get Me Out Of Here fans not to get too attached to Holly Willoughby as he wants his “telly wife” back next year.

The This Morning presenter appeared to rule Holly out of co-hosting a second series of the ITV reality show after she stepped up to cover for Ant McPartlin as he continues to focus on his recovery.

The 56-year-old presenter told the Daily Star: “Holly has been a triumph in the jungle. I am so pleased because it’s worked out so well for Dec in what was a tricky situation.

“It was always going to be a difficult series for Dec [Donnelly] so I was happy Holly was able to step in.”

He added: “But I can assure you it’s very much a caretaker role. Don’t get too attached. Dec got very lucky – he’s looking after my telly wife.”

I’m A Celebrity fans have gone wild for Holly, who reportedly earned £1.7 million last year, with an extra 1.8 million viewers tuning in this series. However, some have been less keen on some of her sartorial choices.

Holly recently revealed that she has grown to love her looks after years of being self-conscious.

She told Red Magazine earlier this month: “I feel like now I’m getting older, I’m much happier with my face than I was when I was younger. There was a time where I wouldn’t go out of the house without at least putting mascara on.”

While Holly enjoys life in the Jungle, Rochelle Humes has been covering for her on the This Morning sofa and Phil has admitted that while it has been “fun” working with the singer, he can’t wait for Holly to return.

He said: “When Holy gets back we will go out for a drink and catch-up about it all.”

Just make sure it’s on the weekend guys, we know what you two are like with a tequila hangover!

Do you think Holly should permanently replace Ant? Leave us a comment on our Facebook page @EntertainmentDailyFix and let us know what you think!