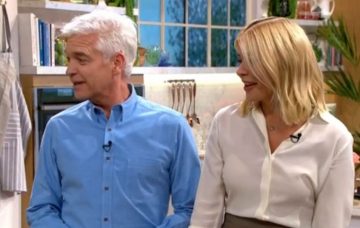 Phillip Schofield “freaked out” as This Morning reveals new studio – with a twist!

The magic of TV means it's the same... but not quite!

Phillip Schofield and Holly Willoughby were back on This Morning on Monday after a two-week Easter holiday.

But it was all change as the duo introduced viewers to the show’s brand new studio.

ITV’s studios on London’s South Bank are undergoing extensive renovation, which means the channel’s daytime programmes including This Morning and Good Morning Britain have relocated.

And it’s a familiar place to Phillip!

The former BBC children’s TV presenter told Holly: “It is freaking me out. Just on the other side, behind those stairs on the fourth floor was the Broom Cupboard.”

Phillip gave a history of some of the studios, saying the three original studios at BBC were called TC1, TC2 and TC3.

“TC1 is where, I think Graham Norton is and where the next series of Saturday Night Takeaway may be, then in TC2, we have Loose Women and Lorraine, and TC3, where we are with Good Morning Britain, who are just on the other side of the wall.”

“The weird thing is, of course, this building – and most people recognise this iconic telly building, a proper TV making building,” he said.

“The first time I ever came here I was 17 years old and explored the whole thing. Doctor Who could be walking past, then a whole bunch of vikings.

“Doctor Who was actually filmed here in studio 3, which was the drama studio so the walls are a bit thicker.”

Another famous show filmed in This Morning’s temporary new home was Fawlty Towers!

And, in a TV twist, despite being in a new studio, This Morning has brought its old view with it!

Monday’s episode of This Morning opened with a throwback photo of Phillip and Holly staring out the old studio’s window looking over the Thames, before morphing into a live shot of the pair adopting the same pose looking at the same view.

They explained to viewers they’d brought the view with them thanks to the magic of television so, although the show is now based in West London, the gorgeous shots of the Thames will remain the same.

Phillip and Holly said that pretty much the whole studio has been rebuilt identically, bar a few minor changes.

There is a new green room just off the live set, which had Martin Lewis sitting in it on Monday morning, and a new catwalk in the fashion corner of the studio, which Holly took great delight in running up and down.

Another new feature is a small breakaway area with a table and two chairs, while the kitchen table has new fancy gold chairs, although Phillip revealed the seats are so slippy, gold doilies have been put on the seats to stop people sliding off!

Phillip and Holly also revealed the new studio is on the ground floor, which means they can get bigger and better things into the studio.

The old studio was on the first floor, so anything on-screen had to fit in the lift to get up!

But this time around, Phillip said they could get cars into the studio, while Holly said she’d like to welcome an elephant into the space. Er, okay then, Hols!

Many viewers admitted they couldn’t see any difference in the two studios – apart from the ‘fake’ view from the windows!

Some others, meanwhile, said they enjoyed Phillip’s trip down memory lane and learning more about the history of the studio.

Can you tell the difference between the old and new This Morning studios? Leave us a comment on our Facebook page @EntertainmentDailyFix and let us know what you think!