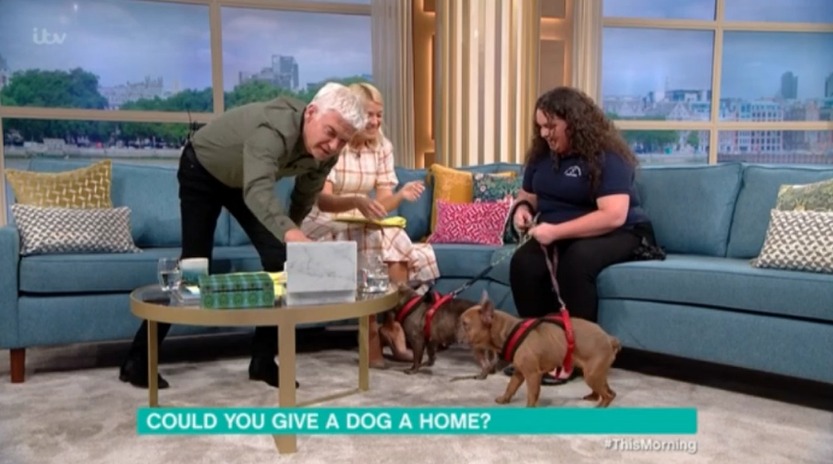 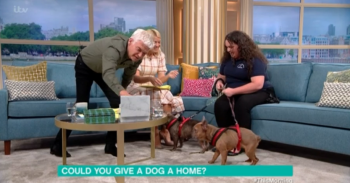 He scrambled for tissues

Phillip Schofield was forced to clean up after two dogs weed on today’s This Morning.

Phil and co-star Holly Willoughby were joined by French Bulldogs Coco and Chanel, who after being found deserted in a shopping bag, are in need of a loving home.

But midway through the interview with Kirsty from Four Paws Animal Rescue, the dogs decided to do their business on set leaving Phil scrambling for tissues.

As one of the dogs started weeing on the carpet, Holly said: “Oops we’ve had a little accident. It happens when you get nervous on the telly sometimes, don’t you worry.”

Phil then reached for the tissues and placed it over the wet patch on the carpet.

Within seconds, the second pooch began doing his business on the floor and Holly exclaimed: “Oh the other one’s having a go!”

Holly and Phil then began giggling as they comforted the dogs.

Viewers watching from home were amused by the antics.

One person said: “#thismorning @hollywills @Schofe trying to keep it together with those dogs @thismorning,” while another wrote: “Oh god!!! A dog has done their business on @thismorning’s carpet reminding me of the hilarious Donkey time when he did the business too #ThisMorning.”

Oh god!!! A dog has done their business on @thismorning‘s carpet reminding me of the hilarious Donkey time when he did the business too #ThisMorning

A third tweeted: “#thismorning Wow, hard to believe TWO dogs needed a poo. Didn’t the woman walk them this morning????”

Last month, a lamb pooed on This Morning when John Barrowman and Emily Atack filled in for Phil and Holly during the Easter break.

After a segment with two lambs, John was seen rubbing the hem of Emily’s dress with a wet wipe as they giggled.

After a household cleaning VT was shown, Emily said: “Have you got any tips on how to get lamb poo out of a dress?”

John added: “She’s got lamb poo on her dress and I’ve got lamb wee on my leg.”