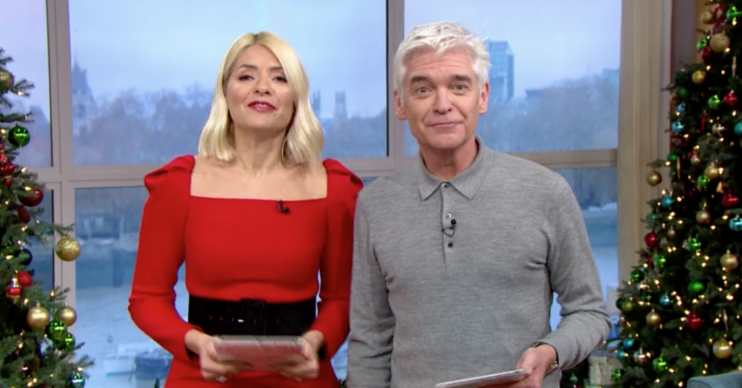 It was his last day on This Morning before Christmas

It was his last day hosting This Morning today until the New Year and host Phillip Schofield finally broke his silence amid allegations of a feud with Ruth Langsford.

The TV host – who is at the centre of a media storm – took the chance to make what some have seen as a sly dig at Ruth and her husband Eamonn Holmes.

The pair will be covering for Phil and Holly Willoughby over Christmas.

It’s claimed that Ruth has lodged an “official complaint” against the silver fox amid allegations of a “toxic atmosphere” at This Morning.

Read more: Bookies offer odds on Phillip Schofield getting the sack from This Morning

Today, coming back from the adverts, Holly bemoaned the fact she would miss an interview with actress Saoirse Ronan during her Christmas break.

Eamonn and Ruth will be very angry. They’ve planned their whole Christmas around this.

“You cross about that?” Phil asked.

“Yes because we won’t be here,” Holly replied.

“We’re not gonna be here. You can stay. Although Eamonn and Ruth will be very angry,” Phil said.

He continued: “They’ve planned their whole Christmas around this.”

Alison Hammond, too, waded into the alleged spat.

Earlier this week she tweeted to show her support for Phil.

YOU ARE LOVED full stop ♥️

An ITV spokesperson slammed reports of a feud between Phillip and his co-stars, eight of whom are reported to have spoken out.

Fans think Ruth made a complaint against Phil after he cut her off live on air back in April.

Head to our Facebook page @EntertainmentDailyFix and let us know what you think about our story.