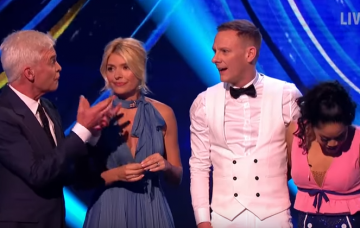 Phillip Schofield has jumped to the defence of Antony Cotton after the Dancing On Ice star was criticised for ‘inappropriate’ behaviour during the launch show.

Antony – best known as Corrie’s Sean Tully – put on a sterling performance on the ice with pro partner Brandee Malto.

But some viewers were baffled when Antony ended his routine – to Wham!’s Club Tropicana – by yanking at Brandee’s top and appearing to take a cheeky peek.

One fan tweeted: “Why on earth did he just look down her top? Totally inappropriate.”

Well, kicking off Monday’s This Morning, Dancing On Ice co-host Phil was on hand to explain EXACTLY what was going on.

And, as we all expected, there was a very simple explanation!

Phil explained that, as part of the Club Tropicana routine, Antony was meant to end the performance by pulling a wad of cash from Brandee’s top.

But eagle-eyed viewers may have noticed that the prop bundle of cash actually fell out of Brandee’s top earlier on in the routine.

So, when Antony was peering down Brandee’s shirt, he was looking for the prop, rather than just having a random peek!

Phil said: “When you get in the car and you’re coming home [from Dancing On Ice], you’re looking at what people are saying on Twitter. It was generally very positive, which is lovely, and thank you very much for watching, if you enjoyed it.

“One thing was massive… it’s funny how people misunderstand and don’t quite see what’s going on.

“Antony got a bit of stick for looking down Brandee’s top.

“Well, if you don’t watch it perfectly in rehearsals, [what happened was the] money dropped out of her top, and at the end of the routine, he’s supposed to take it out of her top.

“Being the showman he is, he carried on.

“He wasn’t just randomly looking down her top. He was looking for the prop and that’s what happened.

Holly Willoughy then chimed in: “No, there wasn’t!”

Antony and Brandee earned 15.5 points for their Club Tropicana theme, landing them in the middle of the first week’s score board.

Love Island’s Kem Cetinay and I’m A Celeb’s Jake Quickenden topped the board with 20.5 points each, while British Bake Off winner Candice Brown found herself at the bottom with 13 points.