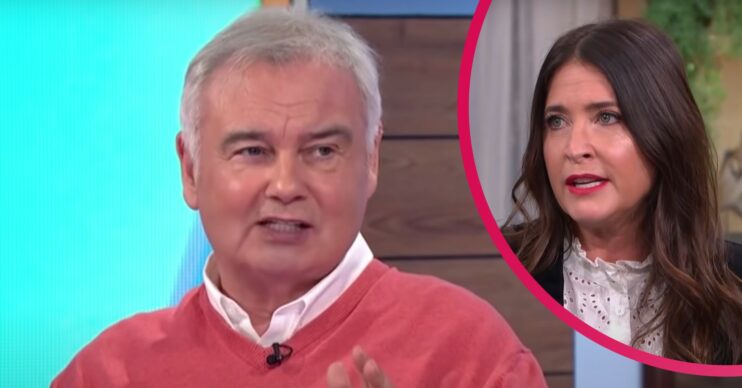 She hosts fashion segments on the ITV daytime series

Phillip Schofield came under fire from Eamonn Holmes earlier today – and now it appears Lisa Snowdon has given her backing to the axed This Morning star.

Lisa reacted on Instagram after Eamonn insisted he had “to set the record straight”.

And this morning Eamonn indicated he had “no regrets” as he told fans he was in a “reflective mood”.

Several broadcasters went on to comment on the veteran presenter’s post, with many offering their support and best wishes.

Among them was BBC newsreader Huw Edwards, A Place in the Sun presenter Amanda Lamb and ex Loose Women panellist Saira Khan, alongside Lisa.

Phillip Schofield and Eamonn Holmes row: How did Lisa react?

Lisa, 50, commented on Eamonn’s post which showed him looking off to his right as the GB News anchor sat on stairs.

Read more: Who is This Morning star Lisa Snowdon engaged to? When is her wedding?

“But said what had to be said to set the record straight.”

In the same interview, Eamonn took a dig at former This Morning co-star Phillip Schofield, labelling him “very passive-aggressive”.

Lisa indicated her support for Eamonn’s Insta post with a “raising hands” emoji and red heart emoji in the comments section.

The “raising hand” emoji is used in a celebratory manner, and is regarded as a positive emoji.

However, she did not comment directly on any aspect of Eamonn’s interview.

ED! has approached a representative for Lisa Snowdon for comment.

Huw, however, did appear to respond specifically to comments made by Eamonn.

And Huw, 60, wrote: “You certainly are at the top of your game my friend.”

So proud of you and everything you stand for!

Eamonn replied, with a thumbs up emoji: “Appreciate that from you my friend. Thank you for saying so.”

She wrote: “So proud of you and everything you stand for!”

“Had to stand up to their lies,” Eamonn wrote back to her.